This Save a Lot Ad with Rapping is Actually...Really Good? 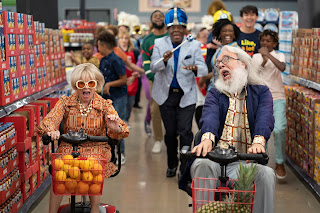 You know what is often extremely cringey? When big brands try to do something, "Hip," or popular. Sometimes it inadvertently works (see Wendy's Twitter account) but oftentimes the whole endeavor is awful. Having people rapping about a grocery store sounds like it should be atrocious, but against all odds, the rap is straight fire. Yes, Save a Lot made an ad of people rhyming about their grocery stores, and it's somehow good. The song is titled, "Like, A Lot a Lot," and while the whole ad has been chopped into 30-second segments for television the entire thing can be seen online. Observe:

Dear God, that deli lady's dubbed-over speed-rap is loaded with clever bits and I'm still astounded this ad isn't terrible. As I'm always doing way deeper dives into stuff than any human needs to, I read some grocery store business websites (yes, there are entire websites dedicated to the trade practice of grocery stores), and the secret to this ad not sucking is actual talented folks were hired. The music video was shot by veteran director Drew Kirsch, who has a Video Music Award under his belt for directing the video for Taylor Swift's song, "You Need to Calm Down." As for the rapping/singing talent, "The spot features emerging singers like Leon Evans, Sarai, and Tamara Bubble, who also has a song featured on Disney’s, 'Raya and the Last Dragon.'”

I guess when you hire someone who knows how to shoot a music video and give gigs to folks who actually can craft a verse the result is a shockingly fun and catchy ad. The beat is hot, the rhythmic rapping catches my ear, and as I said, the lyrics are solid. Plus, there is a sense of humor to the ad, a bit of a cheekiness that it's acknowledging how silly this whole endeavor is. A little self-awareness always goes a long way.

A PR website with a big article about the ad (I told you I research random stuff way too much) describes how this advertisement is designed to, "...modernize the brand and deepen its relationships with customers." I assume, "Modernize," is a coded way of saying, "We need more young people to shop here too." I'll be honest, when I saw this ad it occurred to me I hadn't gone to a Save a Lot in a while and did recall some geat deals being there. I maybe need to swing by one sometime. Mission accomplished, Save a Lot, you got me.