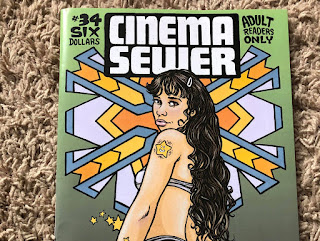 "Cinema Sewer," has been a yearly-ish magazine written by Robin Bougie chock-full of articles about old adult movies, trashy sci-fi cinema, and generally interesting stuff. I've reviewed a, "Cinema Sewer," collection before and during 2020 reached-out to Robin about an idea I had for an article. The article discusses an artsy adult movie, "Malice in La La Land," that had a ton of money poured into it only for the thing to get critical plaudits but fail to make a profit. He was happy to collaborate with me on it and now I've got a piece in what has been revealed to be the last issue of, "Cinema Sewer." This 34th issue is the final one as Robin is going to move on to other projects. I had no clue this would be the magazine's conclusion when I pitched him my article, but I'm honored to be a part of the last chapter in, "Cinema Sewer." Be forewarned he writes about lots of mature subjects so, "Cinema Sewer," is not for the prudish! That said, it makes for some fascinating reading! You can buy a copy of, "Cinema Sewer," #34 at this link and browse other works by Robin and friends too.