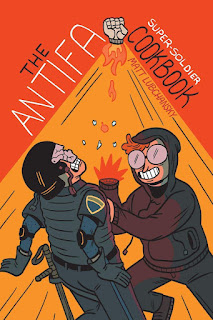 What if everything the right thought about liberals were true? They were part of some highly orchestrated conspiracy with Antifa being dedicated to warping everyone's minds with chemtrails and Hollywood propaganda? Matt Lubchansky has written a beautiful piece of satire dedicated to this, with their sharp insight and great illustrations providing a hilarious and thoughtful read. Throughout, "The Antifa Supdersoldier Cookbook," published by Silver Sprocket, we witness as those awful left-wingers protest a statue of a slave-owning politician from the past with their tools of disruption as only a police force that can do zero wrong stands between chaos and order--which is why they need military equipment to fight the leftist protestors, of course.

The best kind of satire reflects what some people actually think, and the deadpan presentation never, "Breaks," even as the absurdity rachets up--of course the police need a space station that lets them monitor all phone calls, it's for public safety! Lubchanksy's art has just the right amount of exaggeration as we watch an Antifa footsoldier be given high-tech surgery to aid in their destruction of a peaceful and happy society. Things are just a touch cartoony enough that the outlandish stuff sits alongside everyday reality (a toothless media dedicated to giving, "Both sides," a voice) perfectly. 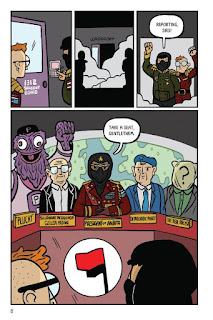 "The Antifa Supersoldier Cookbook," is hilarious but also makes you think, as at the end of the book it lays-out how some things it presents as dark jokes are all too real--"Qualified immunity," anyone? It will be in comic and bookstores soon or if your shop doesn't have a copy you can always buy it directly from Silver Sprocket's website. I was provided a digital copy for the purposes of review and am glad I was because this was such a great comic!

Posted by David Charles Bitterbaum at 10:48 AM