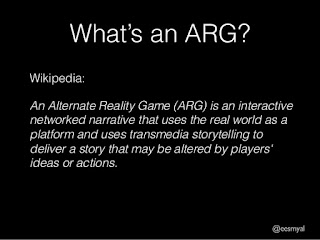 Reed Berkowitz is a man who designs, "Alternate Reality Games," or ARGs and he wrote a fascinating article. An ARG can be something like an escape room, or a fun game where you explore fake documents or websites to solve a mystery (like those subscription boxes where you find a killer or such). When people play ARGs they realize they are not real, however, and the games eventually reach an end for various reasons (people get bored, it gets too expensive to make the game, "Work," and so forth.

Berkowitz writes about how QAnon is like an anti-game. It has people scouring websites and creating elaborate conspiracy theories that would be funny if folk didn't outright believe them. People in QAnon don't know what is, "Real," or, "Fake," because everyone could be part of some massive conspiracy. QAnon is like an echo chamber of people stating crazy theories and others taking those and running with them. ARGs are designed to provide answers when you, "Solve," the mystery while QAnon just keeps raising questions and trying to pull more people into its orbit as members or targets of its scorn.

ARGs are fun and harmless, QAnon is dangerous as its insistence that the "Evil," people need to be stopped no matter how outlandish or foolish the claims about them are could lead those who are unstable to commit acts of violence. With Trump (who QAnon followers adore and think is one of the few, "Good," powers) about to be out of power, I don't think things will get better. They may very well get even more fringe and dangerous.