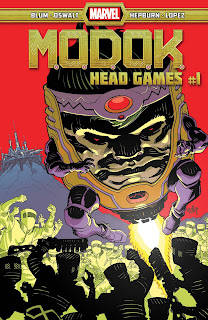 The Marvel comic's villain known as M.O.D.O.K. usually has a tough time. He was a regular guy who was experimented on by the evil agency he worked for--Advanced Idea Mechanics or A.I.M. It turned him into a super-genius known as the Mechanized Organism Designed Only for Killing. It also basically made him a huge head with little useless limbs that everyone in the Marvel Universe seems to enjoy mocking due to his wonky appearance. He's super-smart, very violent, and nobody takes him seriously. Some of that is his own fault as he basically just wants to be evil and kill everyone (it is in his name, after all). Well, the first issue of the mini-series, "M.O.D.O.K: Head Games," does a solid job turning a laughingstock into someone weirdly relatable.

As the issue opens, M.O.D.O.K. currently is one of the heads of a newly-revitalized A.I.M. He's on the board of the organization and they're doing a good job making money and doing evil-science stuff. Still, everyone makes fun of him and otherwise likes to diminish his efforts. Then, he starts seeing weird images of a happy life with kids and a wife. He thinks he's going crazy and some of his fellow A.I.M. leaders are aware of these kinda-sorta hallucinations so he ends up fighting his own organization that doesn't even respect them and then at the issue's end has to seek out help from a Marvel hero he'd normally be trying to murder. 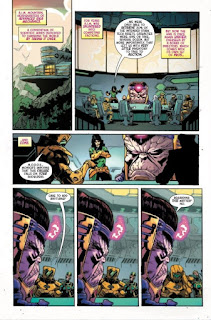 Having a M.O.D.O.K. that gets little respect despite his efforts and had actual hopes of a happy existence beyond killing everyone makes him a bit more interesting beyond his usual cartoonish villainy. The comic is written by Jordan Blum and Patton Oswalt--the latter is also going to be voicing M.O.D.O.K. and both are co-writing the upcoming Hulu show with the character. If these showrunners for the cartoon featuring M.O.D.O.K. can give us such an enjoyable comic, then I bet the Hulu program will be great. Scott Hepburn's artwork is fantastic too, making M.O.D.O.K. look out-of-place in his odd appearance but never like an outright caricature. I loved reading this first issue of, "Head Games," and can't wait for answers to the mystery of just what it is M.O.D.O.K. is seeing and if he'll pursue a joyous life or try to focus on the killing-aspect of his name.