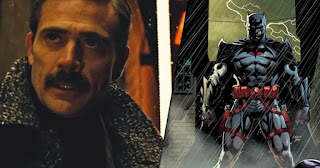 Way back in, "Batman VS Superman," we see Bruce Wayne's parents getting murdered in a flashback because it isn't a Batman movie without his parents getting shot. One thing about that though was a relatively popular actor, Jeffrey Dean Morgan, is Thomas Wayne. It was a tiny role, so why did they have him do it? Well, when a, "Flashpoint," movie was announced it all made sense. In the, "Flashpoint," comic we witness Barry Allen altering reality to make it so that his mother doesn't die during his childhood with his Father being wrongfully convicted as the killer. It causes a dramatic ripple through reality and changes a lot of things. One of those changes is that Bruce Wayne is shot that night in crime alley with Thomas Wayne becoming Batman and Martha going insane and becoming the Joker. This made me excited for a, "Flashpoint," movie with Jeffrey Dean Morgan as an older Batman and also excited my Mother-in-Law, Kim, for whom Jeffery Dean Morgan was one of her favorite actors. Then DC's movies became a mess.

Zack Snyder finished, "Batman VS Superman," but left or was fired from, "Justice League," depending on who you ask. Then DC scrapped their plans for a closely-linked film Universe and now is playing things more fast-and-loose in terms of continuity. They are still making a, "Flashpoint," movie but it'll have Ben Affleck still as Batman as he was in recent flicks plus Micheal Keaton of all people returning as Batman too. Ezra Miller will still be the Flash, but Jeffrey Dean Morgan won't be involved, it seems. That's a shame, as Jeffrey Dean Morgan as Batman would've been cool, as Zack Snyder and I agree--and I don't often agree with Snyder on stuff as he sometimes tries a little too hard to be edgy (like his recent bragging about how his director's cut of, "Justice League," will have Batman saying, "Fuck," on HBO MAX because that is...cool, I guess). I'm hopeful the, "Flashpoint," we do get is cool, but I'm just kind of bummed there will be a lack of Jeffrey Dean Morgan as Batman.