"Skull and Bones," Sounds Like it's in Development Hell 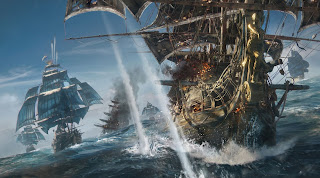 Way back in, "Assasin's Creed III," there was a small gameplay element where you could pilot a ship and get into fights with other ones. It was loved by players and led to, "Assasin's Creed IV," having sailing about around be the main feature--making it often thought of as the, "Assasin's Creed," for people who normally hate, "Assasin's Creed." Other games in the series have used boats a bit, but there was interest in a game announced in 2017 called, "Skull and Bones," which sounded like a pirate-themed game from the company behind, "Assasin's Creed," Ubisoft, without all the baggage. Again, that was 2017. It was mentioned by Ubisoft in 2019 as being delayed to 2020 and supposedly still getting work done. Now there is an, "Open letter," of sorts from the game's creative director, Elisabeth Pellen. This letter to the fans says how the game has a new vision and will be re-revealed in 2021 as whatever the new, "Skull and Bones," will be. This worries me.

I am concerned that, "Skull and Bones," is going to try and become one of those games that is a, "Service game," as rumors are saying, in that you buy it and then keep buying more upgrades and features. There are games that are essentially, "Free," and do this like, "Fortnite." There are also games like the new, "Avengers," one which you buy it, but then it also comes with a mode that offers a premium currency. These aren't monthly fees like in MMORPGs like, "World of Warcraft," these are games that want to technically, "Never end," and keep getting money as they add an update here and there with a new character/outfit/ship/gun/whatever. I'm not sure I want that, but Ubisoft maybe wants to offer that sort of game in the hopes it'll get, "Skull and Bones," out of whatever development Hell has been delaying it. When I first heard about, "Skull and Bones," in 2017 I was excited. Then I forgot about it. Now, I just don't really have much enthusiasm or hope for it at all.
Posted by David Charles Bitterbaum at 6:07 PM