Flashback Friday: "Stubbs the Zombie," Was a Great Game With a Fantastic Soundtrack 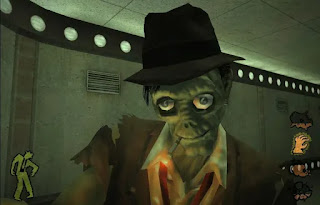 Back in the latter days of the original Xbox there was a video-game called, "Stubbs the Zombie." It was a fun game where you played a zombie in the futuristic 1950's who went around eating people and turning them into zombies as well. As this was 2005-tech you couldn't  have a ton of people on the screen running from zombies or as zombies, but it still was great fun. The soundtrack was a hoot too, with many modern rock and punk bands turning-in covers of classic 1950's jams. I'm not alone in feeling this way, as Kotau's Zack Zwiezen made a post about the fun tunes. I swear, with all the games getting remastered versions lately good ol' Stubbs is just screaming-out for one too.