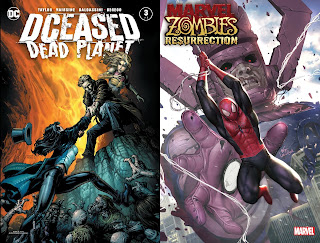 You like zombies? You like comics? Well, buckle-up and get ready for some fun via zombie-themed comics that both have really long titles. I'm talking about the latest DC mini-series in the, "DCeased," line, "DCeased: Dead Planet," and the first-but-kinda-second issue of, "Marvel Zombies: Ressurection." I liked both for similar reasons--they are clever, a little gruesome, but also quite funny.

"DCeased: Dead Planet," takes place a number of years after the first mini-series, with a grown-up Damian Wayne as Batman and Conner Kent as Superman returning to their original Earth after fleeing to one from another dimension in the hopes of actually curing a zombie plague. Things have gone quite awry, however, and the people left alive on this Earth are both the best and worst of humanity. Trevor Hairsine illustrates the nasty zombies quite well and Tom Taylor injects levity where needed--such as when Damian Wayne and Jim Gordon hug and observe if any villains had realized Bruce Wayne's biggest fear was emotional vulnerability they could've run him out of Gotham with a reassuring pat on the back. There is also a bunker full of DC's richest jerks who've managed to use their money and some questionable tech to stay alive, and it is hinted they will be quite an issue a bit later. It's good stuff. 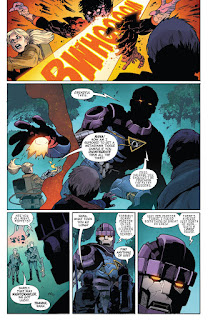 "Marvel Zombies: Ressurection," is a new take on the, "Marvel Zombies," that were quite popular some years ago, and although this is the first issue, it actually is a follow-up to a one-shot that laid the groundwork for this series some months ago pre-pandemic with the same creative team on that comic as this one--writer Phillip Kennedy Johnson and fantastic illustrator Leonard Kirk. I'm not as familiar with Johnson's writing as I am Kirk's artwork, but he gives us a solid yarn, discussing how the zombie virus seems to alter mutants and those with powers in ways a bit stranger than normal folk, and he keeps things light too such as with a sentinel that was reprogrammed to act and talk like British nanny for the Fantastic Four's kids--Franklin and Valeria. As with, "DCeased: Dead Planet," certain threats are foreshadowed and questions are raised (Franklin has mysteriously lost his powers and Spider-Man seems to know why but ain't telling) and thanks to Kirk the whole thing looks gorgeously disgusting.

"DCeased: Dead Planet," and, "Marvel Zombies: Ressurection," both provide quality zombie-related yarns thanks to great writing and artwork that fits the at-times gruesome scenes well too. I enjoyed reading both and would recommend checking each series and the issues that came before these out.
4 out of 5 stars (for both).
Posted by David Charles Bitterbaum at 9:57 AM