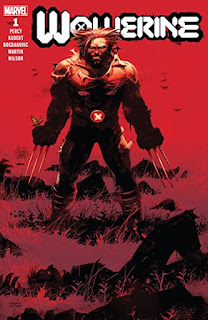 The, "Original," Wolverine has had a number of series. He also was dead for awhile with an old man version of himself from another dimension running about as well as his clone, X-23 and son, Daken, getting up to adventures. The latest thing with the X-Men though is that they are basically immortal, able to be resurrected at any time and never truly die--something Wolverine relates to a bit now that he's back and witnessing all the other mutants dealing with this newfound way of kinda-sorta healing from any wound. That is one idea covered in the latest, "Wolverine," ongoing, but writer Benjamin Percy actually simultaneously juggles a lot of plotlines quite well and interestingly with artist Viktor Bogdanovic illustrating it all wonderfully too.

In the first five issues of, "Wolverine," we've had different storylines come to the forefront, retreat a bit, and then return. We've got Dracula taking an interest in Wolverine and using the infamous mutant Omega Red as a way to get to Wolverine, we had black market drug dealers stealing mutant meds that were meant to go to Nations that recognized the sovereignty of the Mutant nation of Krakoa whom Wolverine teamed-up with a regular human to take down. Those two storylines kind of weaved around one another in the first three issues, then it seemed in issue #4 we were getting a bit of a break with Wolverine retreating to a bar in the middle of nowhere near the Alaskan-Canada border where he had been going to clear his mind. Instead, things got really twisty. 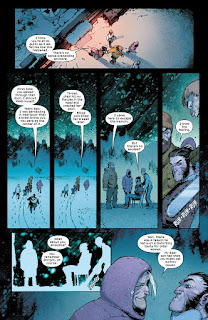 This bar had a bartender who remembered Wolverine wronging him. He used the internet to recruit other people who hated mutants--Wolverine especially--and they all tried to drug him (which Bogdanovic illustrates well as things get woozy and weird) and bury him in ice as he heals from any wounds as they know...only for Omega Red to kill them all and Wolverine's frozen body making a great keg for some vampires who use his blood to walk in the daylight as they turn others and use them to try and build a vampire nation in areas mostly abandoned due to economic hardship. It has been interesting witnessing Benjamin Percy careful dip in and out of assorted storylines, having them all play a part off-and-on as Wolverine just tries to come to grip with this new normal of mutants thinking they are immortal but not realizing other immortals--like vampires--maybe have an issue with others thinking they can take over their scene. Plus, one could argue if mutants were able to force themselves into having a Nation, why not vampires too?

As Wolverine points out in issue #5, getting a lot of money can make good people better and bad people worse, with the same going for immortality. He worries some of his mutants will become evil and twisted now. It is an interesting consideration I don't recall any other X-book touching upon too much yet. Between Percy's writing and Bogdanovic's artwork, I've been really digging this latest, "Wolverine," ongoing comic. I worry with so many mutant-focused books coming out right now some might end-up being lost in the shuffle--after all, people may be going, "Eh, I don't need another book with Wolverine when he's in a bunch of others," but the quirky fun and crazy plotlines of, "Wolverine," make it worth a read.
5 out of 5 stars (for all the issues overall).
Posted by David Charles Bitterbaum at 12:53 PM