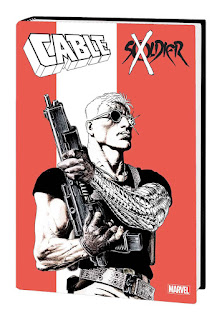 A good long deal of time ago---2011--I made one of my big sprawling posts where I rambled on about a variety of subjects. In this case it was was the start of the New/Nu52, my love of Tupac's works, and the fascinating and underrated Marvel series, "Cable," in its later issues when it led into the equally stellar and less-known, "Soldier X." The last issues of that run of, "Cable," were #97-#107 and then things wrapped-up with, "Soldier X," over eight stellar issues...followed by three forgettable ones unrelated to the otherwise epic yarn told. Plus, "Soldier X," was never collected in a trade, which sucked. The end of, "Cable," and good chunk of, "Soldier X," were series as dark and disturbing as they were clever and hilarious. Now Marvel is finally collecting all this comic-goodness (and those pointless extra issues) in a big book cleverly titled, "Cable: Soldier X," as I discovered flipping through the latest May 2018 issue of, "Previews."

These books written by David Tischman and Igor Kordey (and illustrated by a number of talented people including Igor Kordey as writer too) are like hidden classics and you owe it to yourself to take advantage of an opportunity to read them without having to dig in back-issue bins or searching about on eBay. You can easily pre-order a copy via Things From Another World or at all finer comic shops. Trust me, don't, "sleep," on these books, as the kids (I think) say! God, I'm old.
Posted by David Charles Bitterbaum at 1:12 PM