Secret Empire #1 AKA One Huge Disaster of an Event 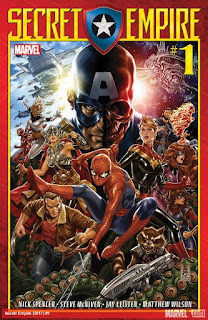 Oh God, this was even more of a mess than I had heard and imagined. You see, I didn't read, "Secret Empire," because when it was revealed that Captain America was somehow a Nazi/member of Hyrda all along thanks to some fiddling with the Cosmic Cube I thought that was absurd. Then, when I heard he was going to somehow be taking over America and putting it under Hydra's reign that just sounded stupid for something supposedly in the normal Marvel Continuity. Maybe as an alternate-world tale, but a fascist dictator taking over our nation via apparently tricking all the other heroes, then rounding-up anyone else with powers, and shutting-down any dissent in the Marvel Universe which is supposed to be like the world out our window? That's just idiotic--and don't make jokes about how its like Trump being in power, he's a terrible President but as far as I know he isn't a Nazi. Also, he surely isn't able to keep us under a strict and violent rule, he can't even keep news about him boinking porn stars out of the media.

I didn't read any of the lead-up so I was extra confused as, "Secret Empire #1," reads like the second or third chapter of a story, with Hydra-Cap in power and being all cliche and evil. I suppose part of the reason for that is there apparently was a #0 issue and other lead-in stories. God help me though, I can't imagine reading anything else related to this steaming pile of crap. I mean, even if the whole concept is wretched if writer Nick Spencer had at least told the story in an interesting way I could muddle through this. Instead its just a bland mish-mash of, "Some heroes are rebelling, Captain America is doing evil stuff, here are some quick references to other characters getting their own tie-in comics!"
The most notable thing in this issue besides the general idiocy of a Nazi Captain America running our nation is that Las Vegas is apparently destroyed at the end by Hydra-Cap because the city has been known for aiding some of the rebels...so because a few hundreds of residents help rebels he kills millions mainly so the comic can make it clear--"This Captain America is so bad y'all!" Also, he murders longtime sidekick and friend Rick Jones but looks sad about it so we should apparently pity him even though he's become a Nazi/Hydra evil dictator--as if the comic can't fully commit to making Captain America completely laughable evil and tries to act like he still has a bit of humanity. He revealed he was a Nazi and has taken over America by force, I'm not going to go, "Awww, he's all sullen and wonders if maybe he's doing the wrong thing, poor Cap!"

I mean, it really just says something that such a recent event was in a dollar bin along with all the other issues that I passed on picking-up as I knew reading the first issue would be more than enough for me. The first issue of an event like, "Civil War," sells for above cover-price, and even if that Millar-scribed series had flaws, at least it was entertaining. This is just atrocious and I feel bad for anyone who picked, "Secret Empire," for full price as at a dollar I still feel like I threw away my money. It is such a waste of time I wish I could get the 15 minutes it took me to read it refunded so I can spend those moments on a better comic.
Marvel has since moved on from this and appear eager to bury any memory of, "Secret Empire," with the big news now being popular writer Ta-Nehisi Coates is going to be taking over writing a non-brainwashed Captain America  from Mark Waid (who had the thankless job of trying to rehab the character a bit after Nick Spencer ruined Cap) for what will most likely be a very-promoted run. That is something I would actually like to read, unlike this miserable...tale from the dollar bin!
Posted by David Charles Bitterbaum at 12:04 PM