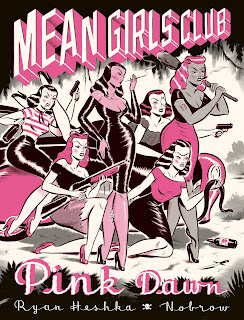 I previously read a short yarn about the titular Mean Girls Club from creator Ryan Heshka and published by Nobrow. I loved it and am pleased to see it was just a taste of the over-the-top goodness found in this full-length original graphic novel, "Mean Girls Club: Pink Dawn." Whereas the short comic about the club just showed a general night of the ladies causing mayhem, this book chronicles the attempts of a corrupt and evil mayor (along with complicit judicial and religious figures) to take-down the Mean Girls Club.

A young female mechanic named Roxy who gets entangled in a plot to destroy the club is the protagonist for most of the book, with it occasionally focusing on the club, but generally we get an outsider-view through Roxy of these mean girls who like to smoke, drink, take drugs, eat sugar-filled candy, and raise Hell. The Mean Girls are not good guys per se, but perhaps by being true to themselves as rabble-rousers, they end up being heroes as they take on a city full of crooked politicians and hypocritical religious leaders. It's a fun story made all the more entertaining thanks to Heska's stellar art-style. 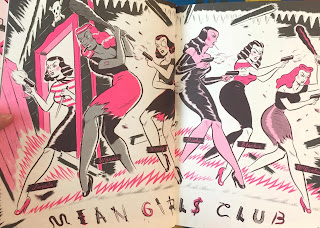 Heshka's art for the comic looks like someone took 1950's nostalgia and made it twisted and absurd. The supposedly wholesome-looking dames of the era are morphed into rough-and-tumble women who defy stereotypes, creating a fantastic visual paradox of the kind of cars, radio, and clothes found in, "The good old days," but with a very modern-take on how things weren't that, "Good," and instead kept women disenfranchised and made second-class citizens. The colors are black, white, and pink, giving everything an extra feminine touch cleverly countered by the swearing, violence, and ample drug use of the Mean Girls Club. It's just gorgeous to look at and makes it so that the solid concept of the Mean Girls Club has incredible visuals to match.

"Mean Girls Club: Pink Dawn," is a great book full of excellent artwork and clever storytelling that results in a clever take on how we often may view the past through rose-tinted (or in this case, pink-tinted) glasses, but whether its the past or the present, there are people who won't stand for a corrupt status quo , and even if they have their own problems you sure as Hell want them fighting for you as opposed to against you. I can only hope we get to witness more misadventures by The Mean Girls Club in the future, because I adored this book and rate it...5 out of 5 stars.

You can buy a copy for your enjoyment at Nobrow's website or all finer comic shops.

Please Note: A copy of this book was provided by NoBrow in one of their usual occasional press mailings sent out to the media for the purposes of review, as they recalled I loved the first small comic about the Mean Girls Club.
Posted by David Charles Bitterbaum at 3:47 PM