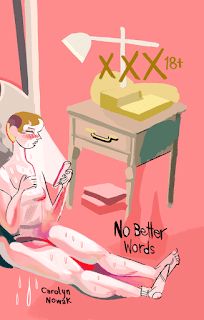 "No Better Words," is a short original graphic novel by Carolyn Nowak described by her as, "Poetry+Porn." It focuses on a young woman dealing with her attraction to a man through expressing her desire as metaphors about loneliness and horniness that the protagonist herself admits could be considered either clever or terribly hokey--she really rails into herself for using the cliche of mazes. This book is gorgeously illustrated and quite introspective. Eventually she talks with the man she likes at a house party and they admit they both have feelings for each other. 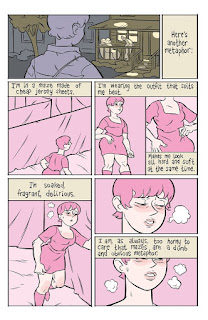 For those asking, "If this comic advertises itself as being for adults only why doesn't it sound that sexy?" Well, that's because there is a lot of set-up to make us really care about the characters, but then yes, they do have sex, and it is drawn really explicitly and is made all the hotter by how we actually like these individuals we see fucking--then we also witness them talk and cuddle a bit more after having sex. It actually reads like how two people would in fact interact if they admitted they liked each other and fucked as opposed to the countless corny porn-stories that exist with minimal or predictable plot (e.g. "I didn't a order a pizza, but now that you're here...).