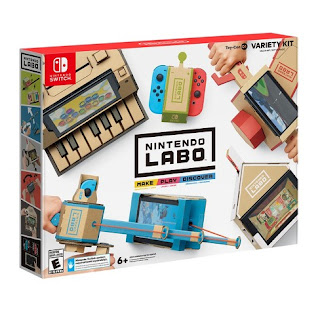 I've previously talked about how I just can't get that excited about the Nintendo Switch. Even now with it having some cool games and getting good reviews I found I lacked much interest. Then I heard about Nintendo Labo and thought, "If that actually works it could be pretty fun."

Nintendo Labo is an example of Nintendo doing what I like best--being unique. It is cardboard that you assemble around your Switch device or various controllers and it enables you to do all kinds of zany things from playing a piano, to doing a fishing game, making little bugs that shake, or creating your own strange and cool stuff. It isn't a game you win so much as a toy you play with. It's not about beating a high score or conquering opponents, it is about building a set that lets you become a cool robot for no other reason than it is fun! 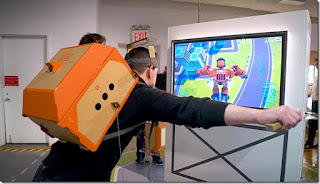 Nintendo Labo is the just-right mixture of weird, creative, and fun that appeals to someone like myself. Now then, the only issue is that I'd have to shell-out the cash for a Nintendo Switch and all the somewhat-costly Labo, so for now I'll probably just watch videos of people enjoying it. Still, it is a cool-looking concept and I'm happy that reviews of Nintendo Labo indicate it is good fun for all ages.
Posted by David Charles Bitterbaum at 10:45 AM