My sister-in-law is a big fan of the popular CW show, "Supernatrual." I have only ever seen a handful of episodes myself and besides all the continuity its built-up over these many seasons which leaves me hopelessly lost, find it to be good fun. One thing I do have a lot of familliarity with however would be, "Scooby Doo," as I watched repeats of the old shows many times as a child growing-up back when cartoon channels would have big blocks of old-school cartoons during the day. Therefore, when I heard about the big cross-over between these two properties advertised with the clever name, "Scoobynatrual," I was interested. The odds seemed pretty even this would be a clever and fun show or an absolute trainwreck. I read some reviews from sources such as the AV Club as well as The Outhousers and considering how those two entities seem to hate almost everything and liked this, I was excited to check it out. So, my sister-in-law came this weekend to visit (it was her birthday weekend) and we all gathered around the television and watched, "Scoobynatural."

"Scoobynatural," was quite good! As I mentioned earlier, I know precious little about, "Supernatural," besides the general concept. This episode thankfully stands mostly-alone from the regular series and provides basically all the information someone needs upfront to figure-out what's going on--Sam and Dean are brothers, they fight the supernatural, they have a friend named Castiel who joins them when they're sucked into an episode of, "Scooby Doo," etc. As for, "Scooby Doo," you again just need to know the basics to enjoy the appearance of that mystery-solving gang, and who doesn't know at least a little about, "Scooby Doo," after all? 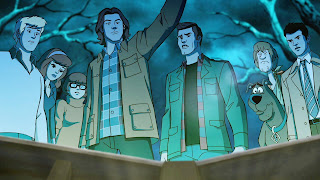 The general plot is Sam and Dean are (as I mentioned) sucked into a television that clearly is haunted and find themselves trapped in an actual season 1 episode of, "Scooby Doo." Something is clearly off however as the episode unfolds in a way much gorier than usual and Sam and Dean struggle to keep the fact that supernatural forces actually exist a secret from Fred, Daphne, Velma, Shaggy, and Scooby lest they spoil their, "Innocence," as Scooby-fan Dean states he worries about. The animation is solid and a lot better than an actual old episode of, "Scooby Doo," which is something acknowledged at various points (it is pointed-out a book leading to a secret passage is notable as it isn't, "Painted into the background," in a clever meta-moment). The laughs also come quick and most land quite well, with it never feeling like either, "Supernatural," or, "Scooby Doo," are unfair butts of the joke so much as having both their positives and flaws lovingly pointed out.

"Scoobynatural," is a delightful mash-up of two properties that at first wouldn't seem like an ideal match, but through their differences actually illustrate how similar they both are as well. I had a good time watching the program and die-hard fans of either property no doubt will pick-up even more in-jokes than newbies--but both experts and those less-familiar with these shows will have a stellar time watching. I rate this 5 out of 5 stars!
Posted by David Charles Bitterbaum at 12:58 PM