When the Hero is the Villain--"Belladonna: Fire and Fury" Mini-Run Review 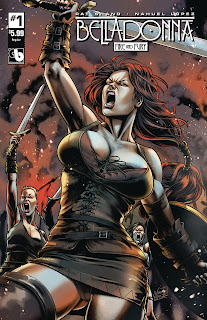 I've been reading the latest mini-series from the publisher Boundless, "Bealladonna: Fire and Fury." Five issues have come out so far and they feature the usual violence and cheesecake-styled nudity expected in Boundless titles, but it has also contained an interesting story-element that has kind of been sneaking-up on the reader--namely, the protagonist, Belladonna, is arguably the bad-guy in the story. Without it ever outright being said or stated in the comic, the plotting has allowed the reader to see it slowly revealed that the supposed proud and strong warrior Belladonna is kinda evil. Considering how in this day and age readers of tales are often beat over the head with story-elements, I'm impressed how her villainy was been more of a subtext so far, carefully unveiling itself without the comic yelling, "Hey, Belladonna's pretty terrible!"

Belladonna and her warrior-woman known as, "Furies," spent an earlier mini-series fighting a terrible sorceress and seemed to be alright, but within this mini she and her crew tricked a kind village of magical women who commune with nature so as to steal their riches, and when found-out as theives violently killed anyone who stood in their path simply for trying to protect their own stuff. The first four issues had this occur and in the fifth issue Belladonna and her group now are shipwrecked and about to face a tribe of murderous cannibals--so someone actually worse than Belladonna. Still, while this group may be straight-up evil, all the previous people Belladonna and the Furies have killed seem to be gathering the little resources they have left after being defeated with a plan to get some revenge...and frankly you kind of want to cheer for the people eager to stop Belladonna. 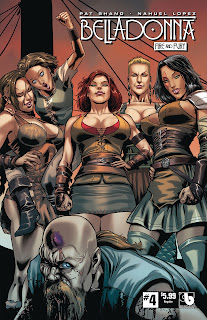 "Belladonna: Fire and Fury," has featured the usual explicit sex and over-the-top violence Boundless prides itself on, but as I've said before when I comment about how they are a surprisingly high-quality publisher, their books are worth reading. This mini-series has so far been engaging as well as action-packed and full of eroticism. I'm excited to see what will happen as the people wronged by Belladonna and her Furies bolster their forces and if Belladonna can at least be redeemed a bit fighting a group of people even more violent and (literally) bloodthirsty than she is.
5 out of 5 stars.
Posted by David Charles Bitterbaum at 9:48 AM