Jack of All Trades, and Master of All!
Earlier on in these posts I talked about my favorite comic-book writers, artists, and colorists. What about those creators who do it all though? The ones who are the writer of their comic, do the art, and if it is in color cover that aspect too? Such a person is indeed quite talented and a rarer entity. This year there was one writer-artist I found myself especially impressed by...

Writer-Artist of the Year--Michel Fiffe 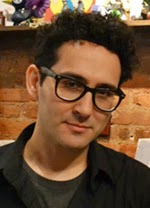 Michel Fiffe is an incredible creator. Starting out a smaller-name and relatively less-known except among some independent comic-readers, Fiffe has been increasing in stature lately thanks to his contributions to various titles (writing for Marvel, a segment in "Captain Victory", and more), but he is especially drawing eyes for his stellar title, "Copra" which I gave a beaming review to for the release of its first trade-paperback, and it continues to be a stellar title as we head into the next year.

Fiffe has continuously put-out great work, be it with him as just the writer, artist, or doing what I feel he especially excels at--being both. I encourage you to seek out his work in the new year as you will definitely be impressed. I am quite sure Fiffe is a name that we will be seeing a lot of in the future!
Posted by David Charles Bitterbaum at 2:06 PM