2014 In Review--The Discontinued Food Item I Will Miss Most

The Slow Disappearance
This year a food item I always loved was discontinued. Well, it was more of a seasoning, but bear with me here. At first it was hard to find in some grocery stores, then Walmart had some bags of it but once those were gone none returned to refill the shelves. Eventually it became apparent that yes, Kraft Fresh Take was cancelled. 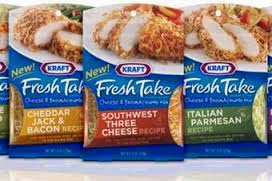 Kraft Fresh Take was like a shake-and-bake deal where you could take your chicken or pork chops, and shake them up in a bag of deliciousness. You went from having a dull raw piece of meat, to dipping it into heaven, and after letting it cook in the oven for awhile taking it out and devouring the tastiest pork chop you've ever had. I myself loved the "Cheddar Jack & Bacon" recipe along with admiring the "Southwest Three Cheese". I could take-or-leave the "Four Cheese" one however, and wouldn't hesitate to pass on the "Italian Parmesan". I really loved "Fresh Take" but apparently not enough people did because it's discontinued. Sigh.

Should you desire to try something at least resembling Fresh Take you can go to a website Kraft has helpfully assembled with substitute recipes. It of course will never be the same, but it's a nice thought. As it is now though, unless you have a local grocery store that somehow is carrying older Fresh Take items (and if it is, make sure they aren't already expired) the odds of you getting to try this delicious item are basically zilch. It's a shame, because I really do miss that Cheddar Jack & Bacon one. Oh well, at least I have my memories.
Posted by David Charles Bitterbaum at 7:56 AM