Television Tuesday: "Paul T. Goldman," is the Weirdest Show Ever, and Extremely Entertaining 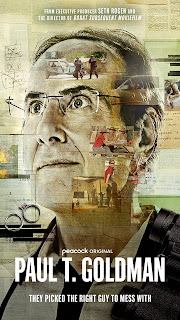 Is Paul T. Goldman a regular guy who found himself wrapped up in crazy events that forced him to adapt and go from a, "Wimp to a warrior?" Is Paul T. Goldman a genius villain capable of twisting reality to suit his version of a story? Could Paul T. Goldman be the victim who is doing his best against all odds or is he the mastermind playing chess while we think it's a game of checkers? My answer to all of these questions is simply: "Yes." Having completed all six episodes of "Paul T. Goldman," on Peacock, I can only say this is the most bizarre piece of television I have ever seen and was captivating.

What starts out as a bit of a true-crime documentary directed by Jason Woliner over nearly 10 years morphs into a bizarre and attention-grabbing masterpiece with all the thanks/blame falling squarely on our protagonist/unreliable narrator and star of the show, Paul. To explain everything about this program would ruin much of the enjoyment viewers will get as the puzzle unties and unveils itself, so I'll stick to the basic overview. A number of years ago, Paul divorced his second wife when it became apparent she was cheating on him--and possibly also a sex worker with a whole enterprise of employees. Paul actually appeared on the news discussing this and wrote a book about everything that happened which he self-published on Amazon to decent reviews. It sounds cut-and-dry, but things get weirder as the six episodes unfold. 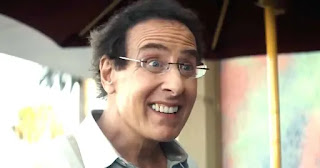 The show features interviews with Paul and others plus includes many dramatic recreations of scenes from Paul's book. Everyone in these scenes is an actor, except Paul. Paul plays himself even while some actually notable thespians appear alongside him. You've got talented folks playing all this perfectly straight and serious while Paul is an amateur thespian at best struggling not to grin during dramatic moments or otherwise, "Break." With every episode, it becomes more and more apparent that Paul's, "99% true, well 97% true," story has a lot of holes in it and we're just along for the ride with Jason Woliner as attempts are made to figure out what's a fact, what's actually fiction, and just how deep this rabbit-hole of madness goes.

Paul T. Goldman himself seems like someone's fever dream of a sketch-comedy character come to life. He has a bug-eyed energy that seems both exhausting and endearing. Every sentence is yelled with enthusiasm and often punctuated with an odd laugh or giggle--even when it ruins the moment. Paul clearly can't act and is sincere to a level that's alarmingly naive--unless he's the best actor ever and playing all of us for fools, either scenario is quite possible. After you sit through the entirety of, "Paul T. Goldman," you'll have a clearer picture of what happened in Paul's life, but whether we're supposed to loudly cheer for his success or boo and hiss at the mere mention of his name is up for debate. 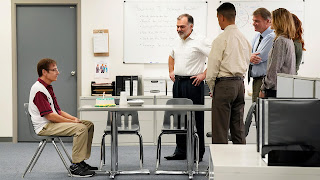 I still don't know exactly who Paul T. Goldman is, but I know what this show about him is--extremely engaging and entertaining. I rarely tell people to subscribe to a streaming service for a single show, but you've got to at least try and get a trial subscription or do the ad-supported version of Peacock if for no other reason than to watch, "Paul T. Goldman." It is that astonishing and bewildering, kind of like Paul.