Flashback Friday: "Final Crisis," Was Great, Even if it Was a Mess D. Emerson Eddy has a new post on Comicsbeat in which they discuss how, "Final Crisis is a bit of a mess. It’s also one of the greatest events that DC has ever published." I honestly could not agree more. "Final Crisis," was a mixture of its own self-contained weirdness thanks to writer Grant Morrison, something that had been led into via other DC series by different writers, and the climax of a bunch of Morrison's own other DC that was seemingly unrelated to, "Final Crisis," but arguably more important than official tie-ins or lead-up series. You can both read it by itself and be confused, or read it with everything that relates to it and...still be pretty flabbergasted, but still in a good way.

As Eddy says, "It's a spectacular mess." The art is great, even as fill-in talents were needed due to delays, the story is at its most basic about ultimate evil (Darkseid) versus ultimate good (Superman and other versions of Superman from various realities too). However, that is extremely reductive to say as all kinds of other random stuff gets thrown into the story too, from sentient computers (OMAC) kids from the future (Kamandi), other random New Gods, there is intrigue from outer space via Green Lanterns, the, "Batman R.I.P.," storyline Morrison was doing heavily overlaps with everything, Martian Manhunter dies, Barry Allen comes back to life, Monitor-related characters return, an Obama-inspired Presidential Superman appears, and more, and more, and more, damn it! People have talked about how, "Crisis on Infinite Earths," or, "Infinite Crisis," felt a bit like DC was taking everything and the kitchen sink and combining it into an event. Well, "Final Crisis," does that and shatters the sink into a bunch of random asides and concepts that don't quite glue back together perfectly but still manage to make something functional and cool. 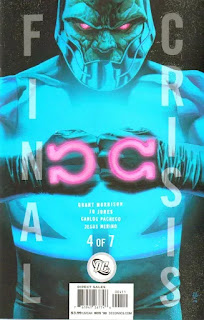 I was not very familiar with the DC Universe when I read, "Final Crisis." The only DC series I had been following closely at that point were, "Green Lantern," and, "Batman." I was incredibly overwhelmed, confused, and unsure of what the Hell was happening in the event. I still had a great time reading it, though. If that isn't the definition of a mess that is also somehow amazingly great, I am unable to say what is.