People Are Really, "Excited," About the Newly Redesigned, "Clue," Characters and it Says a Lot About the Fantasy of Faux-Danger 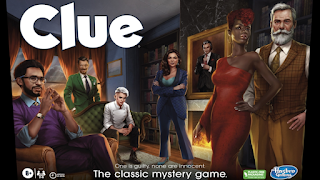 The internet. It is a place where someone is bound to have an opinion the complete opposite of yours, no matter how absurd. Also, it is a place where everyone is horny--especially for danger. It happens often. We had folks wishing a 10-foot-tall female character from, "Resident Evil: The Village," would seduce them and possibly also step on them back in 2021, Now we have it where lots of people are hoping the cast of a newly redesigned, "Clue," will give them orgasms as opposed to blunt-force trauma--or maybe both? Seriously, I stumbled upon at least two articles on sites I frequent that covered how folks think the new box cover art for, "Clue," looks like everyone is giving you, "Come hither eyes," and/or plotting to kill you. Having looked at the cover art, I do admittedly see where people are coming from but I think the intentions do look more murderous than erotic.

Posted by David Charles Bitterbaum at 10:58 AM