You Finally Can't Be Fired Just for Being Gay or Trans 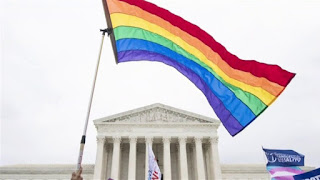 It took until 2020 but finally, LGBTQ people have a ruling that states being Gay or Trans does not mean you can be fired. Yes, in 2020 in a number of States without protections your job could fire you for being Gay or Trans and it was perfectly legal. The Trump administration fought against it and the House and Senate seemed incapable of passing a new law to make it clear LGBTQ individuals were protected, but it was pointed out the Civil Rights act arguably applied to LGBTQ folk, and now here we are.

There was a ruling for marriage equality in America some years ago, but it was possible you could be married on a Sunday and fired on Monday once people realized you had a same-sex or Trans partner, as the saying went. The Trump administration has been trying its hardest to roll-back protections for LGBTQ people, but now Nationwide you have at least some protection against getting fired for no other reason than being Gay or Trans (and if you are, you can sue for discrimination). It is sad it took this long, but at least now we have something in place.
Posted by David Charles Bitterbaum at 10:06 AM