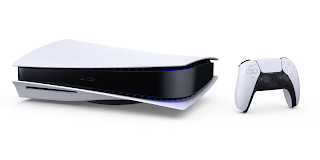 Back in April, the PlayStation 5 controller was unveiled and I thought it was ugly as sin. Today, Sony shared trailers for PlayStation 5 games and revealed what the console will look like. I don't love it, I don't hate it, it just is...interesting. Some people already hate it, but I am a little intrigued by its unique little curves and such. I don't have anything especially nice or mean to say about it, but everyone else clearly does.

I still am not sure--with how I don't play games as much--if I'd have much need for PS5. The Nintendo Switch has been awesome as it lets me play console games in bed or while watching television, but besides that, I am not as much of a gamer as years past, a handful of PS4 titles aside. Still, a new Oddworld game sounds snazzy.
Posted by David Charles Bitterbaum at 9:40 PM