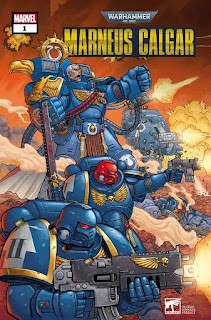 I'm a big fan of writer Kieron Gillen and artist Jacen Burrows. I've followed Gillen from his early, "Phonogram," comics to, "Uber," "Young Avengers," "The Wicked and the Divine," and so forth. Burrows has made a ton of stellar comics with Avatar Press in the past and was the one thing I liked about the otherwise terrible Bemis run of, "Moon Knight," that features Burrows drawing skills. Hearing Gillen and Burrows are teaming-up for comic sounds fantastic! Oh, it's a, "Warhammer 40k," comic. Now I'm lost.

"Warhammer," is a popular tabletop game set in a fantasy realm and, "Warhammer 40k," is its futuristic iteration. It has space marines, space Orks nad all kinds of crazy stuff. There have been some video-games set in both the fantasy and 40k Universes but I've not played them or the tabletop games. I know basically nothing about, "Warhammer 40k," but apparently Marvel acquired the license to it and is going to publish a comic set in that World with the talents of Gillen and Burrows, so I'm gonna read it. Even if I have almost no clue what is going on, at least it will look stellar and be well-written. Maybe I ought to look up some Wikipedia stuff in the meantime.
Posted by David Charles Bitterbaum at 12:09 PM