A Much-Needed Victory for Reproductive Rights 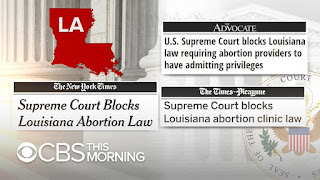 I have been an advocate of abortion rights in the past. After losing our pregnancy due to the baby not being viable and threatening my wife's life--necessitating a D&E--I have been even more outspoken when it comes to being pro-choice as if some states had their way we would not have even been able to save my wife's life without being prosecuted as criminals. For that reason, I can only be very thankful the Supreme Court today struck down an unconstitutional law that would have basically made it impossible to get an abortion in Louisiana.

Plenty of states keep trying to chip away at abortion rights and seeing the Supreme Court put its foot down was encouraging. The fight is not over as there is still case after case, but this was good news. Thank goodness for John Roberts, a more conservative justice appointed by George W. Bush, but who has sided with the Liberal justices in a number of key cases lately (resulting in 5-4 decisions such as this one) because he realizes these cases aren't simply political, they are about the law and the law protects the right to choose. He has still ruled a number of ways I disagree with, but I'll take what I can get in this current political climate.
Posted by David Charles Bitterbaum at 8:13 PM