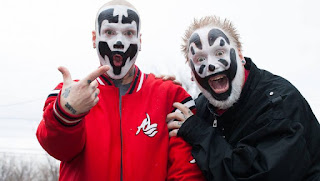 As you may be aware if you currently exist on this planet, we are in a major health crisis caused by COVID-19. It is a pandemic that has made it necessary for everyone who is able to stay home to do so in order to prevent widespread illness and death. Some morons think it is all hoax, that COVID-19 isn't that dangerous, or otherwise want the right to sit in crowded Olive Garden and possibly get sick as Hell from something besides too many breadsticks. These people have been protesting and seem to be supported by America's worst President, Donald Trump as well a number of Governors who want to, "Reopen," their states in the middle of this pandemic's peak. You know one demographic who are being responsible, however, and put all these politicians to shame? Juggalos.

Juggalos are a diverse group. They are basically anyone who considers themselves a fan of the rap group, "The Insane Clown Posse," be they white, black, male, female, young, old, whatever. I'll be honest, I don't like ICPs music at all, but I hear their annual, "Gathering of the Juggalos," which brings out many fans to see ICP, as well as other bands, stand-up comedians, and other entertainment, are off-the-wall events of fun. In the interest of public safety, however, ICP has canceled the 2020 Gathering of the Juggalos, stating how they, "REFUSE to risk even ONE Juggalo life by hosting a Gathering during these troubling times." They feel that the health and safety of everyone is more important than being able to party, and they want to be responsible as even one unnecessary death is one too many. Meanwhile, we have Republican (it's only the Republicans) politicians saying old people or those with weak immune systems should be willing to get sick and die in the name of the economy. 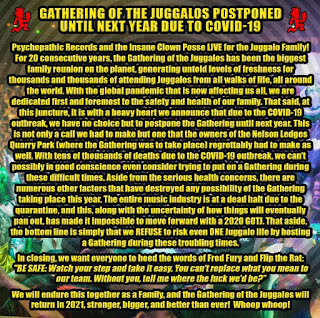 The moral of the story here is that ICP and Juggalos care more about public health and safety than a number of people in political power. I just want to thank Violent J and Shaggy 2 Dope (those are the actual names they go by) for being responsible citizens and encouraging all the Juggalos to be safe and careful as well. ICP realizes we need to quarantine for everyone's safety, I just wish everyone else did too.
Posted by David Charles Bitterbaum at 12:58 PM