I Guess I'm Watching, "The Bachelor Presents: Listen to Your Heart" 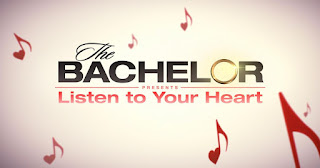 Lord help me, I'm going to watch the latest, "The Bachelor," spin-off tonight. I was originally thinking of skipping, "The Bachelor Presents: Listen to Your Heart," because it looked like a mini-series about a bunch of wannabe famous folk singing karaoke versions of popular songs (I don't think they produce anything original) and potentially having messy relationships. I watch, "The Bachelor," for the messy relationships but could do without so-so covers of popular songs, so why bother watching? Well, now the answer to, "Why bother watching," is, "Because we ain't getting any other, 'Bachelor,' content anytime soon."

Yes, with COVID-19 shutting everything down that delayed the production of the Clare Crowley season of, "The Bachelorette," that was due to premiere around May-ish. We also may very well not get a season of, "Bachelor in Paradise," this year either. This makes, "Listen to Your Heart," the only thing available to satiate my unending hunger for people acting like horny fools on television besides the upcoming Netflix show, "Too Hot to Handle," which also looks delightfully stupid (if the people dating touch at all they lose prize money). I'll be watching, "Listen to Your Heart," and I just hope it has more delightfully silly behavior than drab recitations of popular music. It's something, and at this point with so many shows delayed or temporarily canceled, I shan't be too greedy for a bit of dumb fun.
Posted by David Charles Bitterbaum at 2:10 PM

Email ThisBlogThis!Share to TwitterShare to FacebookShare to Pinterest
Labels: Bachelor in Paradise, Coronavirus, funny, Listen to Your Heart, music, Netflix, Sexuality, television, The Bachelor, The Bachelorette, Too Hot to Handle