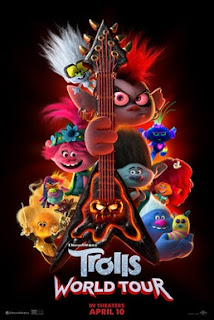 We did a digital rental of, "Trolls: World Tour," recently as Clarkson loves the original, "Trolls," movie and we thought he'd like the second. It mostly kept his attention plus Samii and I found it cute as well. It also has a good message about how diversity is a good thing, using music as a metaphor for fighting efforts to make everyone the same. There is one incredibly clever twist in the movie too which I will spoil in case you want to eventually watch the flick without knowing too much plot, so you've been warned.

The basic plot of the movie is that the Queen of the Rock Trolls, Barb, is trying to gather all the music strings in an effort to turn everyone into a Rock zombie of sorts. Poppy (who has learned she's a Pop troll) has teamed-up with Branch and other Trolls from the first movie to put a stop to this. Midway through the movie, they meet the Funk trolls (led by Trolls voiced by George Clinton and Mary J. Blige) and propose they give the Pop trolls their strings to help fight Barb. The funk Trolls flatly refuse this, and their son (a prince voiced by Anderson .Paak) delivers a song about how the original villains were, in fact, the Pop trolls! The reason the strings Barb wants to gather were even separated in the first place was because the Pop trolls wanted to keep taking all the other Trolls' music and turning it into Pop. This is an ingenious metaphor for cultural appropriation.


There is a long history of various genres having their music taken and turned into a more, "Mainstream," or as .Paak's Troll puts it, "The Pop Trolls started snatchin' up all of the strings (oh no)/Put the melodies on top of poppy lil' beats/They cut us out of the scene." Those are some incredibly deep metaphors and the song itself he says them on, "It's All Love," is incredibly catchy too. and right above this paragraph for your steaming pleasure. It is a really clever piece of, "Trolls: World Tour," and the whole movie is quite fun too, but the twist is what really stands out to me for how deep it is.
Posted by David Charles Bitterbaum at 1:28 PM