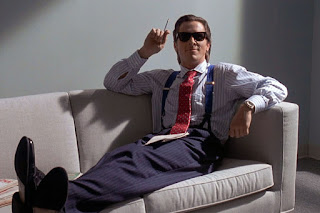 The movie, "American Psycho," came out 20 years ago and took place in the 1980s, but predicted a whole lot of the present. It follows a sociopathic murderer named Patrick Bateman who is able to easily hide his tendencies by hanging-out with another breed of sociopaths--stockbrokers and bankers. Christian Bale plays Bateman superbly and the film's Director Mary Harron has observed, "We never really left," the era of Patrick Bateman. Wall Street still is ruining lives and Republican politicians are eager to reopen the economy even if it kills people due to COVID-19 in the name of the almighty dollar. Plus, it is readily apparent how Trump and his children look like mirror images of Bateman, empty and hollow humans only after a quick fix of accolades or the satisfaction of hurting their, "Enemies."

The movie, "American Pyscho," was based upon a book, but the movie gets a lot more attention for its masterful mixing of the absurdly funny with the grotesquely dark for all to witness viscerally--everyone knows the Huey Lewis and the News scene thanks to memes, whether they've seen the flick or not. "American Pyscho," upon its release did not just represent the past, it predicted a good chunk of the future. Trump and his cronies may not be throwing chainsaws down stairwells at anyone, but they still are covered in plenty of metaphorical blood due to their policies.
Posted by David Charles Bitterbaum at 11:05 AM