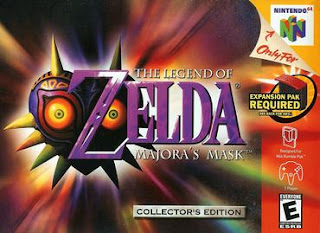 This editorial by Heather Alexandra at Kotaku points out that, "The Legend of Zelda: Majora's Mask," is now 20 years old. I remember its release for the Nintendo 64 and as someone who remembers saving-up and buying the game when it came out (my parents took me to the local Babbage's store where I had pre-ordered it) this news makes me feel a little ancient as well as nostalgic. "Majora's Mask," was a strange kinda-sequel to the smash hit, "Ocarina of Time," and took place in a weird land you stumbled upon called Termina were lots of people from the previous game were present as twisted mirror versions of themselves in a mish-mash World (this was intentional as lots of design elements from, "Ocarina of Time," were reused to make development move fast) that ended within three days. Yes, three days, about a handful of hours in real-time.

The in-game clock ticked constantly and you could always reset time, but you had to figure out how to save the World before the Moon crashed into Termina ending all life. It was intense, wild, and one of the weirdest, "Zelda," games ever. Plus you could wear masks that literally transformed you and allowed the use of new abilities having morphed into fantasy characters in the world such as Zoras, Gorons, and more. The mixture of familiar-yet-different, the, "Groundhog Day," element of resetting time, and using masks to alter your body all made, "Majora's Mask," my favorite Zelda game, even beating-out, "Ocarina of Time," because you know I love weird stuff. Having now been able to play the latest game, "The Legend: Breath of the Wild," on the Nintendo Switch it maybe ties with, "Majora's Mask," with both being stellar in their own way.

I was tickled to see that Boss Fight Books (who make little books about beloved as well as infamous video-games) have launched a Kickstarter to fund their next round of publications about assorted game titles, with, "Majora's Mask," being one new book. I eagerly funded the Kickstarter today and am excited to read more about the famously strange game that holds a special place in my heart.
Posted by David Charles Bitterbaum at 11:13 AM