"Strange Adventures," #1 Is a Strong and Ominous Start 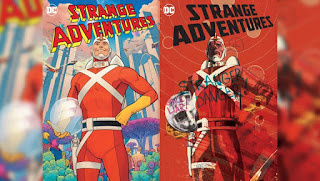 Tom King is a writer who makes absolute masterpieces and big steaming piles of trash. He is incapable of doing something, "Just fine." It is either phenomenal or awful as Hell. Some of my favorite stuff of his (e.g. the things that aren't bad) are his 12-issue series (not all limited series he does, however, as, "Heroes in Crisis," shows). Give Tom King too many issues and he really trails off (his, "Batman," run he was kicked-off of), give him too few and the story will suffer ("Omega Men," almost didn't get 12 full issues and I just mentioned, "Heroes in Crisis"). That sweet spot of 12 issues has given us, "The Vision," and, "Mister Miracle," however, so when Tom King asks for 12 issues you give the man his damn 12 issues and get out of the way of King and his artistic collaborators. Speaking of art, King reunited with Mitch Gerads and brings in Doc Shaner to tell two sides of the same story. It has only just started, but I'm hooked.

Adam Strange is a human who found himself zapped to the planet of Rann and became a war hero there before returning to Earth. Is he a hero, however, or a war criminal? Could he have committed a recent murder on Earth that looks like it was his Ray gun? This is only the first issue so you know we're only going to get questions and zero answers yet, but that's alright. A first issue is about laying-down the pieces we'll be building off of and setting a tone. Thanks to King, Gerads, and Shaner, that is all done with gusto. Gerards illustrates scenes in the present that are filled with growing dread while the Shaner flashbacks have an almost silver age vibe of over-the-top theatrics (that may very well hide some dark secrets too). 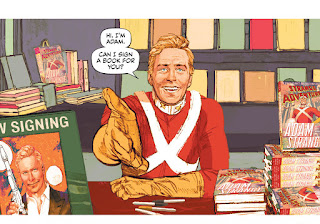 "Strange Adventures," is off to a fantastic start and if I may spoil one little thing at the end of this issue (which solicitations have revealed as well), Mister Terrific will be showing-up too, which makes me happy. I always feel Misster Terrific is annoyingly underused in stories as such a snazzy character. Assuming King, Gerads, and Shaner keep this quality up I think we'll have another magnificent maxi-series to admire when this is all said and done.
5 out of 5 stars.
Posted by David Charles Bitterbaum at 11:22 AM