"Familiar Face," Is Another Odd Delight from Michael DeForge 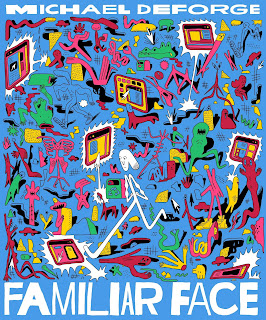 One of the best comic creators working today is Micahel DeForge. I think that can be said with minimal argument. Between an art style that can morph from familiar to abstract within the span of a page to his wild and creative ideas for strange Worlds, DeForge is a pro who has almost never failed to entertain me. His latest release, "Familiar Face," is a dark mixture of futuristic concepts like worrying about what a future that is focused on, "Optimization," may bring along with some very human concerns such as love, longing, and loneliness. I loved it.

"Familiar Face," follows an unnamed woman who works at a complaint department in a future where almost all thing are automated and optimized. To make sure everything runs as great as possible the city will morph itself without warning, moving apartments or people. The bodies of everyone can shift when they sleep too, possibly growing a bit taller, gaining some arms or legs, turning into a four-legged animal-ish person, and so forth. 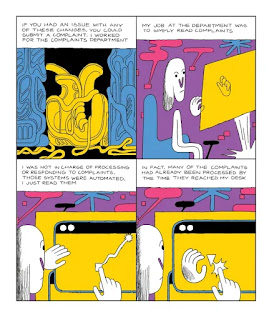 The idea is things are always getting better with this automatic optimization, but it seems like a huge mess. People are allowed to complain, so our unnamed woman reads the complaints. She can't answer them or address them, that is all automatic, she just gets to read them. One day her girlfriend, Jessica, disappears after an optimization update and she is unable to find her anywhere. This results in our unnamed author getting obsessed with figuring out where Jessica could have gone she finds herself willing to join a terrorist cell which causes the city's supposed automatic optimizations to go horribly wrong--although people aren't sure what is a disruptive effort and what is just the city being its usual weird, messy self.

The majority of the comic follows our unnamed woman struggling to come to terms with losing her love in a World that seems more focused on trying to improve while in fact getting worse. It sounds depressing, but with DeForge's unique style of drawing and how colorful and wacky everything looks readers never feel that upset so much as bemused by how bizarre the book is and maybe mildly concerned at how this twisted World could easily be our own before too long. The bits where our unnamed main character reads assorted complaints from random people from years-to-days ago are absolutely hilarious as well, and help break-up the at times the harsh reality of the present she lives in. 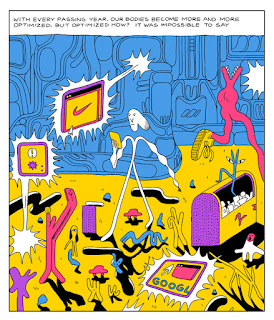 "Familiar Face," is another masterpiece from Michael DeForge in his long line of incredible works. It manages to be as funny as it is disconcerting, and even when focused on a World where automation is key it has a lot of humanity too.
5 out of 5 stars.
Posted by David Charles Bitterbaum at 1:11 PM