This Season of, "The Bachelor," Leaves Behind a Smoldering Crater of Bad Decisions

Last night what feels like the longest season of, "The Bachelor," ended. It was a two-night finale where most of the good stuff was in the 2nd night (obviously) and it basically ended as I described it as being the whole time, "A glorious mess." Peter wanted to be with Madison despite how he and she share almost no political or religious views, everyone warned him about it, she even left the show after realizing how incompatible they were, and Hannah Ann won by default even though Peter didn't love her and he waited until he god-damned proposed to mention that Madison had ditched the scene two days ago.

Then the inevitable happened and we witnessed their break-up a month later which was cringeworthy but brought with it a wonderful moment of catharsis where Hannah Ann absolutely ripped into Peter for how he strung her along and acted like he was in love with two women when in the end it was always Madison (and maybe Hannah B. still, as Hannah Ann mentioned he kept wanting to reach out to her too). Just when it seemed like Peter would be left lonely as he rightfully deserved, the host of the show, Chris Harrison, flew Madison to Los Angeles so she and Peter could have a tear-filled reunion and decide to give being together with another chance against all logic. As Vulture pointed out in its review of the first night, "Very few relationships and marriages have ended because the two people just stopped being in love with each other. It’s money or sex or children or religion or Tonya from accounting. Love doesn’t conquer all. Love conquers, like, 67 percent of things, and that last 33 percent is a beast." Peter and Madison are basically nothing but that other percent. 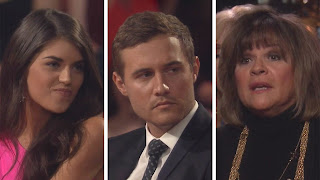 It was an unholy mess in the last half-hour of the show, as Peter's mom, Barb (who had been scowling in a little on-screen corner box the whole time footage was played of Peter and Madison) made it clear she thought Hannah Ann was the best choice and Peter and Madison were doomed to fail. I'm not sure why Barb hated Madison so much, and while I was watching the show last night Twitter was really against her, but she made some solid points about how beyond some supposed romantic chemistry Peter and Madison had nothing in common.

It was a shitshow of a conclusion, with the AV Club giving it a D in terms of entertainment. I disagree with that as I was entertained, but I also will say I'm glad the next Bachelorette is someone from older seasons (before I even started watching), Clare Crawley, who is 38 and has made it clear she wants people who are actually in their mid-20's or early 30's as opposed to folk barely old enough to drink or know what they want in a relationship. Seriously, I was a much different person in the 2nd half of my 20's than the first half, and extremely different now in my 30's. I think some actually grown-ass folk back on this show will help reduce such wishy-washy bullshit we've seen lately.

As the Vulture review of the second part of the finale says (I really love the writing of the reviewer, Ali Barthwell), "...this episode is really a testament to how completely terrible Peter is as a communicator and a partner." Thank God for Barb, who besides the wonderful 20 minutes of Hannah Ann reaming Peter for being a dumbass, helped point out the obvious--e.g. that her own damn son is a moron and she tried, but sorry America, he couldn't stop self-sabotaging. As my title says, this season only leaves behind a smoldering crater of bad decisions.

Nobody comes out of this season looking that great besides maybe Hannah Ann (Twitter really hates Barb now, regardless of how correct she is in all this). All the female contestants hated each other for maybe the first time in the show's history (normally there are some conflicts, but many friendships are formed), Peter made the previously most vilified Bachelor (Arie) look good compared to his choices, and basically, no one thinks Peter and Madison are going to last. I hate this show and I love it so much at the same time, somebody please help me.
Posted by David Charles Bitterbaum at 6:37 PM