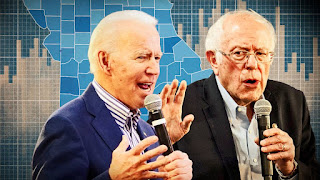 Missouri has its Presidential primary tomorrow. The news seems to not care much, however, with all the focus having been upon Super Tuesday last week and now everyone talking about how important the Michigan primary will be. Generally, when your state is later in the primary season or isn't thought of as a, "Key," State due to the horribly outdated Electoral College, people don't pay it much attention. It is unfortunate, but I hope people still go to the polls as for this Primary it is still pretty close between Bernie Sanders and Joe Biden.

If you're not registered as a Democrat in Missouri the Primary is open so you can actually do a Democratic ballot if you want as any other one is honestly pointless (Trump is going to be the Republican nominee, because that party has long since gone off the deep end of decency or following the law). I hope the turnout is decent and look forward to seeing what role Missouri plays in the nomination. Missouri does get some media focus during the main Presidential election because it can swing between red and blue depending on various factors. Right now we get a bit ignored--what can ya do?
Posted by David Charles Bitterbaum at 7:36 PM