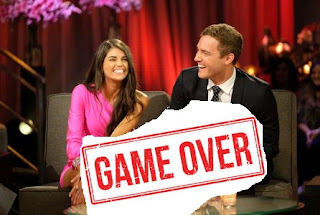 I know this blog is about all of popular culture with a focus on comics and not supposed to be focused upon, "The Bachelor." That said, I can't help myself and just had to share that a mere 2 days after the finale it is official that Peter and Madison have split (if they were even really back together at all). This means it took us longer to witness the finale over two days than the period of time they were together after it ended.

Seriously, they just merrily posted it on their social media. I recently was discussing with my friend Suzanne that at least this season was arguably better than Colton's shitshow. Well, I was wrong. Never-ending jokes about his virginity aside at least he knew exactly what he wanted (to be with Cassie) and they are still together a good deal of time later despite how messy his season was--although Peter's season makes Colton's look peachy-keen.
Posted by David Charles Bitterbaum at 11:29 PM