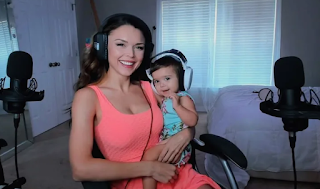 You may have heard of Twitch, the streaming platform that features everything from people playing video-games, to interviewing folk, to basically anything as long as it meets the requirement that is has the streamer talking at viewers (this qualification allowed a big marathon of old, "Mr. Rogers," episodes once, which was cool). Twitch had some controversy when a streamer named HeatheredEffect, who was doing an interview with another person began to breastfeed her baby because it was hungry--which happens, babies get hungry. No special attention was drawn to it by the streamer, she simply fed her baby. At first Twitch took-down a portion of the clip that had this moment take place because they had not had it occur before and an employee in charge of monitoring content for stuff that is not allowed (hate-speech, sex-stuff) was unsure what to do. The staff of Twitch met however, and they all agreed that, "Breastfeeding is not lewd," and therefore something the platform has no problem with. As with anything in the World, this of all things led to some controversy.

As I said above, babies get hungry. If parents are able to breastfeed and do so, they should make sure the baby is fed. If parents choose not to breastfeed and use a formula bottle that is fine too. Now, it is maybe awkward that this all took place on a Twitch stream and she could have very well paused it to feed her baby, that argument is valid. Also, of course the child could not offer its opinion on being filmed breastfeeding as the daughter is only 11 months old. However, it is HeatheredEffect's choice to do what she did, and Twitch chose to support it. I will not judge people for being uncomfortable, as everyone has their own feelings about public breastfeeding (it is legal in all 50 states but everyone has their own thoughts on how public is too public like with the internet and what they feel comfortable with for breastfeeding). However, it reminds me of a quote I can only vaguely paraphrase that points out one reason breastfeeding makes people so uncomfortable is that the breast is unique in how it is both sexualized and serves a non-sexual purpose. There is a lot to consider here, but at the end of the day Twitch said it was fine just as it would have had the right to say they would not allow it as it is their platform, their rules.

Twitch is cool with it though, so people can choose to not tune in or be fine with it. As we enter an era where everything is basically filmed, streamed, or taped to some degree this will probably grow as a topic of discussion. Back 15 years ago someone could have easily breastfed in public and only had to worry about rude passerby, now there is the concern of how everything gets a picture taken, a tweet, or an Instagram post and how this will impact discussion about breastfeeding, privacy, and what is okay or not okay to post online.
Posted by David Charles Bitterbaum at 11:05 PM