Nick Nolte is the One Reason I Would See, "Angel Has Fallen." 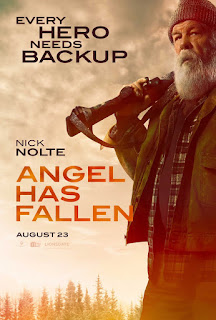 I remember seeing, "Olympus Has Fallen," some years ago via Redbox or Netflix and being pretty unimpressed with it. Gerard Butler was a Secret Service agent who saves the President from evil foreigners and corrupt fellow Secret Service agents in order to prevent a special nuclear code from being used to end the world or something. I did not even bother with, "London Has Fallen," and was completely unaware this series had become a trilogy with, "Angel Has Fallen," until I started seeing ads for it this week and read a review by the AV Club who are astounded it is not as terrible as the preceding flicks. There is maybe one reason, and one reason alone I would see, "Angel Has Fallen," willingly if it shows-up some months later in streaming-cue. It has Nick Nolte in it.

Nick Nolte is an interesting man. He loves acting and always brings a strange and engrossing vibe to any character he plays. Whether it was being one of the few good things in the Ang Lee version of, "The Hulk," as Bruce Banners dad, or a man faking being a Vietnam Veteran in, "Tropic Thunder," Nolte excels at both comedy or drama thanks to his weirdo energy. The man has had many ups and downs in his personal life (the infamous 2002 DUI mugshot was pretty bad) but is always a fantastic actor. Hearing he is in, "Angel Has Fallen," playing the grizzled conspiracy-theory-obsessed Father of Gerard Butler's character whose name I don't recall but think is something bland like, "Rick Masters," actually sounds pretty cool. Even if, Angel Has Fallen," otherwise is disposable tripe at least any parts with Nolte on the screen will be engaging.

Note: I looked up the name of Butler's character, it is, "Mike Banning," which frankly I think is about as generic as my guess of, "Rick Masters," so there you go.
Posted by David Charles Bitterbaum at 10:43 PM