Marvel's Desperate Attempt to Seem Apolitical is itself Political 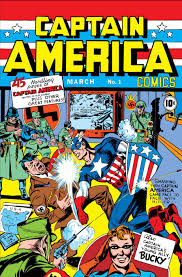 The first issue of, "Captain America," featured the titular hero punching Adolf Hitler right in the face. At the time the comic-book was released America had not yet entered World War II and was trying to, "Stay out of it," for the most part. However, creators Joe Simon and Jack Kirby were so disgusted with Nazi Germany they pushed for the book to be published despite fears it would anger people. The publisher of that comic eventually turned into Marvel. Now, the company of Marvel is so desperate to remain apolitical it is both hilarious and depressing.

Trying to, "Stay out of politics," is itself a political action. If you claim you are going to remove yourself from politics you are basically making it that much easier for those who would do harm to win and keep power. If everyone who did not vote in the Presidential election had voted for Hilary Clinton she would've won by an absurd margin. Instead, a bunch of folk mumbled there was no difference between Clinton and Donald Trump. Now America is a laughingstock on the World stage, our economy is teetering on the brink of a recession, the rights of Women and LGBTQ individuals are being rolled-back, and we have concentration camps full of immigrants who are ripped from their homes or places of work by goose-stepping I.C.E. agents. Maybe you don't want to worry about all that though, you just want to be apolitical--your desire is to, "Stay out of it." Well then, you're basically failing as an American who is able to love their country but also hold it accountable. Interestingly enough, this is basically the idea of an essay Mark Waid wrote for a Marvel comic that was rejected and swapped-out for a, "Less political," piece. 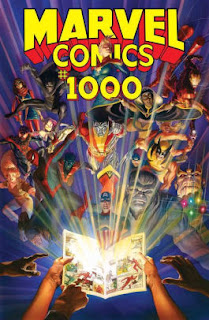 Marvel comics is controlled by a man named Ike Pearlmutter who is a mega-donor and friend to Donald Trump. Marvel is owned by Disney, but Pearlmutter is the one guiding the ship of Marvel to a big degree. Disney probably would not mind its billion-dollar properties avoiding seeming too political and Pearlmutter most likely is quite happy with how much of America looks right now considering how much money he has pumped into Donald Trump's political career. A big retrospective book about Marvel already had Art Spiegelman pull his essay from being contributed to it when his reference to a, "Orange Skull," threatening America was requested to be tweaked so as to not compare Donald Trump to the infamous evil Nazi the Red Skull. Now, a big anthology comic also meant to look-back at the past of Marvel while picturing its future--"Marvel Comics #1000," has been tweaked to avoid fanning any political flames as well.

Mark Waid wrote an essay on a page featuring artwork of Captain America about how he loves America, but it needs to be held accountable. One excerpt goes, “America’s systems are flawed, but they’re our only mechanism with which to remedy inequality on a meaningful scale. Yes, it’s hard and bloody work. But history has shown us that we can, bit by bit, right that system when enough of us get angry. When enough of us take to the streets and force those in power to listen. When enough of us call for revolution and say, ‘Injustice will not stand.’” Waid also observed in his piece, “...we’ve perpetuated the myth that any American can become anything, can achieve anything, through sheer force of will. And that’s not always true. This isn’t the land of opportunity for everyone. The American ideals aren’t always shared fairly. Yet without them, we have nothing.” Marvel swapped the essay out. The new essay actually published in, "Marvel Comics #1000," talks about Captain America's mask serving as a symbol of the American idea of fighting for justice. Justice for what, you may ask? Well, Marvel's answer to that is, "Shut-up, we can't get too deep into politics."
We've gone from Captain America punching a Nazi dictator even when America was refusing to, "Get involved," in fighting him to an essay that dares make any political point being pulled for fear of being, "Too political," resulting in lost sales. Is this Pearlmutter's fault? Is Disney to blame? I don't know, but it is pretty damned ironic to witness an essay about how not being involved in politics is bad being pulled for being more political than a company wants. What a mess.
Posted by David Charles Bitterbaum at 3:02 PM