Flashback Friday: You Know, "Glee," Should've Ended Three Seasons Earlier Than it Did 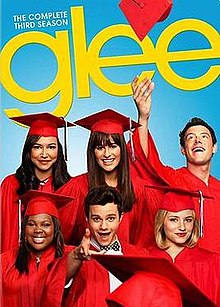 Ryan Murphy is a man who knows how to make television that is both great and at times absolutely terrible. He's given us some incredible seasons of, "American Horror Story," and ones I would like to pretend did not happen. "American Crime Story," had a fantastic first season about the O.J. Simpson trial and did a solid job with its focus in the second season on the murder of Versace, but it got a bit tedious how the episodes kept traveling back in time in an effort to make things a little more complex in a manner that seemed more forced than necessary. "Nip/Tuck," was both simultaneously amazing and atrocious at once, often. Then, of course we have, "Glee." The show, "Glee," was one Samii introduced me to and a program that would at times be ingenious with smart plots and great dialogue while at other times it seemed a bit lazy and self-indulgent. In other words, it was a Ryan Murphy show.

I have a hot-take on, "Glee," however, and that is basically how instead of going for six seasons it probably either should've ended with three or had a much different focus in the later seasons than it did. You see, at the end of the third season of, "Glee," many of the main characters/students graduate from the High School. Everything has a big air of finality even though other newer students have appeared as well. Still, lots of the characters are going off to do their own big things and there are some incredible scenes, such as when Finn takes Rachel to the train station and tearfully says goodbye (we miss you, Cory Monteith, you were a quality actor), and then....the show kept going. It followed a lot of the main characters as they went-on to live their lives other places and focused on the new students too, but then would come-up with weird ways to shoe-horn the old characters back into their hometown to a degree that it seemed like an alum swung-by every episode. 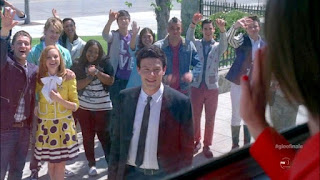 The show plodded along, and it was just a case of diminishing returns for me as it slowly dragged itself to a shrug of series finale after six seasons when three would have perfect--or even maybe if the show had just fully embraced keeping its attention on the younger students instead of continuing to try and keep the graduated ones on the show even as as their stories became less and less interesting. "Glee," by no means became a bad show, but I think if it had stopped when it was ahead that may have been better. I suppose there are many shows that went a lot longer than they should have, but as long as things aren't atrocious there is still a charm to a past-its-prime program, I suppose. Still, "Glee," should've ended three seasons earlier than it did.
Posted by David Charles Bitterbaum at 7:46 PM