Bummer; No, "WILDCATS," Comic in the Foreseeable Future 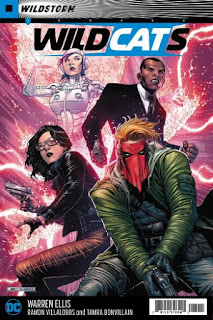 Warren Ellis and Jon Davis-Hunt did a stellar job with their weird reboot of the Wildstorm Universe in their book, "The Wild Storm," which also had an amazing spin-off, "Michael Cray," by the talented Bryan Hill and N. Steven Harris. It was announced there would be a book taking-place after, "The Wild Storm," that would run six issues and be scripted by Warren Ellis with art by Ramon Villalobos, it was to be called, "WILDCATS." I keep using the word, "Was," instead of, "Is," because the book was announced as delayed, then Warren Ellis said in his newsletter (always a good read) that the book was essentially cancelled/dead/not coming out anytime soon.

It is unclear if Ellis is more to blame for this or Villalobos and neither have said anything mean about the other as they both are quite nice fellows. What is clear however, is that as of right now, "WILDCATS," ain't happening, and that is a bummer for someone such as me who always enjoys Ellis' writing and Villalobos' artwork. Maybe someday we will get it in some form, but for now this is just disappointing.
Posted by David Charles Bitterbaum at 3:34 PM