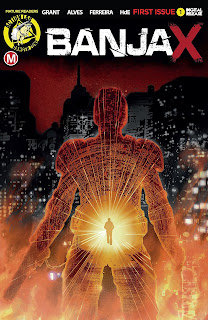 There is a comic I've really been enjoying which just released what I think is the penultimate issue of its mini-series (issue three of four total). It is titled, "Banjax," and between the clever plot and solid artwork I'm really digging it. The book follows an old hero who was super-popular (a big-time celeb) named Laird Mason AKA Banjax, who found when he got too brutal with villains the populace turned on him. Now its years later and his former sidekick, Abel Raines, has become a billionaire who wants to sell a private security force of powered individuals to a World that no longer trusts masked vigilantes and thinks commercialized heroes are the way to go. However, Banjax has found out he's dying of cancer and ready to go on quite the tear to kill anyone he thinks still deserves it, whether Raines likes it or not.

I find the book works really well because it mixes some deeply personal aspects of the characters with some striking and clever political commentary thanks to the talents of Rylend Grant. There are shades of a lot of great comics in here, such as, "Watchmen," with a world where heroes are now either big corporate-powers or mostly forgotten novelties, or a bit of, "Dark Knight Returns," where a grizzled hero comes out retirement to try and fight evil one last time before his end. "Banjax," is by no means a copy of these comics however, instead being its own beast. I appreciate that neither Mason or Raines are especially good or evil, they just are men so subsumed with their obsessions (Mason with ending crime, Raines with making the world safer even if it means questionable choices) they don't even see they are becoming worse monsters than many of the bad-guys they used to fight. 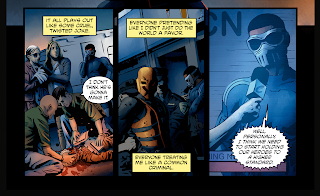 The clever political aspects pop-up in how Mason is astounded that his return to being a vigilante who is even more brutal than in the past is not upsetting the populace, it actually is making him a hero. The comic observes that despite everyone's best efforts they are only making things worse and our current society is if anything more hateful and ready to cheer for violent resolutions to problems than we'd like to admit. Just turn on the news and you can see America is currently in its own downward spiral of hatred and holding-up people who used to once be thought of as tyrants as heroes who got things done, as well as mega-corporations buying and selling every commodity possible. The most outlandish thing about, "Banjax," is how uncomfortably not far-fetched it feels today as compared to how it would've read a decade ago.

Artist Fábio Alves gives the book a suitably dark and dreary vibe, excelling at alternating between the grimy and dirty life of Laird Mason versus the tech-filled and shiny corporate World of Abel Raines. The scenes of fighting are amazingly brutal (in a good way) and even the quiet scenes of tragic contemplation (Mason wondering if he actually is going too far, Raines doubting his own plans) work spectacularly too, with some stand-out moments occurring in issue #2 as a sleep-deprived Raines starts hallucinating due to stressing about Mason keeping him up. The art fits the tone of the book perfectly, in other words. 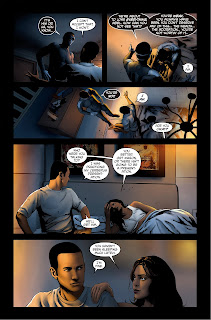 "Banjax," has been a stupendous read so far and I am very excited to see what the concluding (I think) issue for this volume brings. I only hope more volumes will be on the way depending on who manages to survive the end of this mini-series! I rate these first three issues an amazing 5 out of 5 stars. If you want to check Banjax out for yourself you can visit the page of its publisher, Action Lab (and its, "Danger Zone," imprint) and buy some, or get yourself digital copies on Comixology.
Posted by David Charles Bitterbaum at 3:50 PM