I took my Mother-in-Law to Thunder From Down Under this past weekend as a birthday present. How did this happen, and what did we think of the show, you may ask? Let me rewind to explain how things unfolded the way they did.

While having my blog I've written about my enjoyment of the, "Magic Mike," movies and being impressed by the technical skill showcased by entertainers/strippers that comes to their routine. People at various points have recommended to me I actually go to a revue featuring Male dancers. I am someone who would identify as a heterosexual cisgender male, but even if I am not sexually attracted to men I can of course say if a guy is handsome or in good shape, and I enjoy any kind of loud show full of people dancing--so I was by no means self-conscious at the idea of going to such a show. Also, my Mother-in-Law, a woman named Kim, has also seen the, "Magic Mike," movies and said in the past how she'd always wanted to go to one of those big shows. 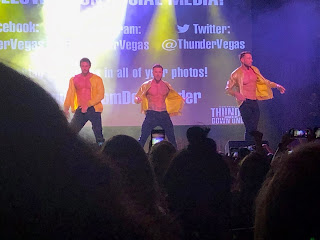 Therefore, when I saw that Saint Louis' River City Casino was going to have none other than, "Thunder From Down Under," at their event-hall I thought it would be a great opportunity for us to give Kim a great present and it would allow me to write a fun blog article. I asked Kim if she would like to go to the show and minded if it was with me, and she said that was fine. My wife, Samii, said she didn't have too big a desire to go and was happy to stay home and watch our son while I went with Kim. Hence, on Saturday, August 10th, 2019, I left in the evening with my Mother-in-Law for a production of Thunder From Down Under at River City.

For those unaware of what, "Thunder From Down Under," is, it's a big show located originally at Excalibur Hotel in Las Vegas, but many of the men who perform in it will go on tour around various States (and even Countries) to do productions in other places. The men in Thunder From Down Under are all (or at least almost all) from Australia, hence the name of the revue. It is not exactly a strip-show so much as it is a big production. Anyone who has gone to a strip club will tell you it can at times be a bit depressing. There is a man or woman on a stage doing some lazy gyrations, then they walk around asking for tips from people before leaving the stage for another performer to come up and do the same thing--rinse, repeat, dull. "Thunder From Down Under," is not at all like that--as I'll go into in a minute. 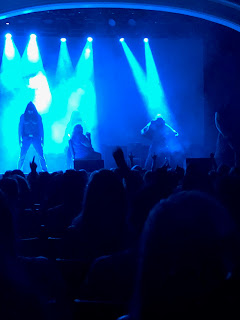 Let's go back to last Saturday night, however. Kim and I arrived at River City and were sure to park on the side by the event-hall so we wouldn't have to wade through all the smoke in the play-area. We walked into the building and went to the event-hall entrance where they scanned my phone (I had the tickets on it digitally). We walked into a big event space like you'd expect for a concert--lots of seats with the rows and sections labeled. After finding our spot towards the middle-back we sat down and there was a projector showing video of a recent photo-shoot the men had done in the desert around Las Vegas. Anytime a man in the video would show-off a bit extra of his butt, pour water over himself, or something of that nature the crowd would let out a little cheer. The show was slated to start at 8:00 PM but as everyone was still coming in at a steady pace past that time the lights didn't fully dim until about 8:15 PM, at which point the video announced how the exciting revue was about to commence!

A show with, "Thunder From Down Under," is a big event. There is a huge stage, a large audience, and there are surprisingly intricate and choreographed routines that you would expect professional dancers to do--along with raunchier dance-moves as well (lots of thrusting and crotch-grabbing). The show began with a routine featuring the guys in casual clothes (t-shirt and jeans) that led to the shirts quickly coming-off and the jeans slung extra-low. I was immediately struck by how tightly choreographed the dancing was. The jumps, flips, and kicks were eye-catching and seeing these guys in peak physical condition doing moves that I--someone who lacks a super-muscular body--would not dream of doing was impressive.

After the opening routine the MC came on stage, a charismatic man named Dean. He of course had an Australian accent and did pretty much all of the talking for the night. He was extremely funny and engaged with the crowd wonderfully between the dancing routines. He had one joke about, "Whipping it out," at which point he unzipped his pants and pulled a toy snake out while remarking, "With an Australian trouser-snake the key is to stroke it, not choke it," to give you an idea of jokes he told. The audience loved it, with the ladies in the crowd cheering loudly whenever Dean was telling jokes, and screaming with glee when a dance routine would start.

Routines after the opening tended to feature one of the men as the, "Star," of the segment and the other guys being back-up dancers. Generally a third of a routine would consist of the guys on the stage doing impressive dancing, another third would involve a lucky woman from the audience being brought on-stage to be danced around (and on), and then the last third consisted of the guys going around the auditorium giving the ladies hugs, picking them up if they said it was okay, and otherwise interacting with the crowd as the women eagerly slapped at their rears and rubbed their chests. As I wasn't there hoping to rub my hands on a handsome man I most enjoyed the dancing bits, although seeing the crowd go wild when the men walked around was always a hoot. Also, although tipping is not required at all some women would put dollars in the guys pants or g-strings and the men would politely accept it so as to not be awkward--tips were never requested however. 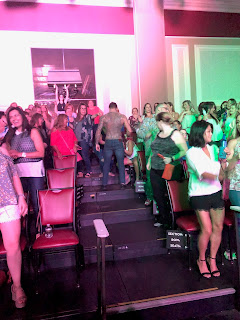 There were some men in the audience. About half seemed bored--as if they'd been dragged along by a wife or girlfriend who didn't want to come to the show alone, and another half seemed to be really into the show. "Thunder From Down Under,' is of course marketed to females, but there is zero issue with men attending, the performers just don't really interact with the guys during the show because this is all about giving the ladies in the audience a good time. Us men are welcome to attend, but our entertainment is not the focal point, and that's perfectly fine because women deserve to hoot and holler and ogle sexy bodies too. Each segment with a star performer had a general theme (Military, Tarzan, Australian SWAT team, Sin City) and the outfits were pretty detailed considering how quickly they ended-up coming off (I wonder how big the budget is for tank-tops considering how many got dramatically ripped-apart). Sometimes there would be a segment with all the guys dancing, such as one that everyone was encouraged to take their phones-out for to film, take pictures of, and share on social media. Everything had a good flow to it and it never felt like a segment was running too long or too short.

As the show proceeded, to break things up around the mid-point there was a hilarious, "Fake Orgasm Contest," where three women in the audience who volunteered went on stage and took turns chatting with Dean before taking the microphone and expressing vocally their best imitation of getting-off. The first woman was clearly a bit too nervous, but the second to go (and who won) was incredible, between her moaning and loudly yelling, "Spank me!" which was clearly cracking even Dean up. The third woman to provide a fake orgasm was good too, but that second lady was incredible.
Towards the end of the program a great moment occurred where Dean asked if there were mothers in the audience, then grandmothers, then any great-grandmothers. One woman near where Kim and I were sitting named Mary had her hand raised high--she had nine grandchildren and one great-grandchild. Dean brought her on the stage and asked if she was a horny grandma, to which she stated she was. With this, the second-to-last segment of the night occurred where the awesome song, "Pony," began and all the of the men started dancing for Mary. Dean joked the segment was called the, "Grandma Gang Bang," and then he himself danced too after previously having only MC'd. At the end he asked Mary to describe what happened with a single word and she simply responded, "More!" which made the entire crowd burst-out laughing and cheering her name.

The last routine was Western-styled with the crowd loudly singing along to, "Save a Horse, Ride a Cowboy," and then the show concluded with everyone told if they wanted they could have pictures taken with the performers (the winner of the fake orgasm contest got to go back-up on stage and have her picture taken to show how it works) now. There were a few picture options, including one that featured everyone giving a middle-finger which was meant to be sent to, "An ex-boyfriend or husband," which was pretty cheeky. Overall the show ran a brisk-but-enjoyable 90 minutes. 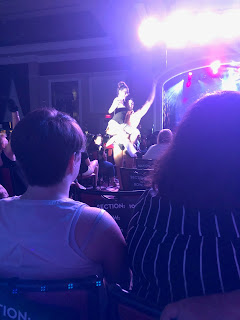 After the show was done I asked Kim what she had thought of it and she stated it was really fun. We both agreed if we had one complaint it would be just how loud everything was. Between the blaring music and the extremely-vocal crowd that would scream and holler at the top of their lungs my ears were ringing all of Saturday night and my hearing still was a little shot Sunday. I perhaps should have worn earplugs for the loudest segments if I'd known just how high the decibels were going to get. That quibble aside however, "Thunder From Down Under," is fun whether you're a man, woman, gay, straight, or any variation that simply loves a good show.

Unlike sleazy strip clubs with their depressing vibe a, "Thunder From Down Under," show is an exciting and very sex-positive production. Women of all ages and sizes were there, equally having fun singing, cheering, and trying to grab a handful of the sexy men whenever they strutted their stuff among the crowd. If you ever have a chance to see the show in Las Vegas or notice that, "Thunder From Down Under," is coming to your town I would for sure recommend attending. It is a fun show without a doubt and made a great birthday present for my Mother-in-Law!
Posted by David Charles Bitterbaum at 2:58 PM