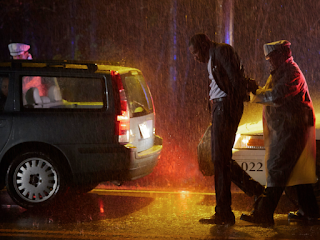 Last week I watched two new shows premiere that are extremely different but touch upon some of the same concepts, interestingly enough. They were the brand-new series from the CW, "Black Lightning," and, "American Crime Story: The Assassination of Gianni Versace." 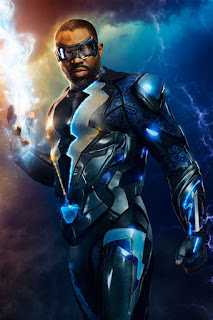 Before we see any superpowers used in the premiere we already have witness our protagonist, Jefferson Pierece, getting his daughter out of prison for protesting police brutality in their town of Freeport, arguing with her about the best way to achieve peace and equality, and being pulled-over by the police and threatened with getting shot whilst being manhandled all because he, "A black man in a suit and tie," supposedly, "Fit the profile," of someone who robbed a liquor store. It is extremely uncomfortable to watch and for some white audiences may be their first exposure to witnessing a distressingly realistic portrayal of something every black person has faced--and that is not an exaggeration, ask a friend of color to tell you about a time their were profiled by the police, a store, anyone, and they will have plenty of stories to share.

It isn't all depressing stuff though, we learn Jefferson Pierce is a well-respected Principal of a school that helps children from rough neighborhoods succeed, he's a family man, and he used to be a superhero named Black Lightning before promising his (now) ex-wife that he would give it up nine years ago before it killed him. A variety of factors cause Pierce to have to suit-up again to save his daughters from a powerful gang however and the show handles the super-heroics just as well as the topical discussions of racial discrimination and income inequality. Honestly, having seen some of, "Arrow," and the, "Flash," which this show thankfully has been stated to take place in its own Universe completely removed from those (for now unless some cross-over happens someday), this is one of the most mature and thoughtful takes on a world with superheroes I have seen. These are grown folk dealing with serious issues...and one of the characters happens to have lightning powers. I loved this show (and everyone else seems to as well) and unlike the aforementioned other CW hero shows which I've merely dabbled in, I plan to watch this new program religiously.

"American Crime Story: The Assassination of Gianni Versace," is the second season of the, "American Crime Stories," program on FX (Season 1 covered OJ Simpson) and the first installment establishes who will be two main focal points--the man who killed Versarce, Andrew Cunanan, and Versace himself. Cunanan is a sociopath and narcissist, obsessed with success, lying constantly, and unsure how to even properly express emotion. Darren Criss was passable on, "Glee," as Blaine but honestly never had much to even work with when it came to that well-adjusted and optimistic character. Here he plays Cunanan as the unhinged and unpredictable killer he was.

I also want to point-out that Ricky Martin, as Versace's long-time partner Antonio D’Amico, is amazing with the pain and sorrow he brings to the role, surprising me with his acting talent considering some decades ago he was only known for singing disposable pop songs and shaking his bottom. Seriously though, he is a well of talent and showrunner Ryan Murphy continues to show he can get amazing and great performances out of folk you wouldn't expect (like Chaz Bono as a right-wing Trump-lover on, "American Horror Story," for example). The most distressing scene (besides Versace's murder) is when Martin as D'Amico has to deal with extremely homophobic and presumptuous statements from the police. It's a stellar show and as a side-note has amazing set-design too, with even those critical of the program admiring how gorgeous it is. I'm eager to watch more stellar performances from everyone as the story unfolds. 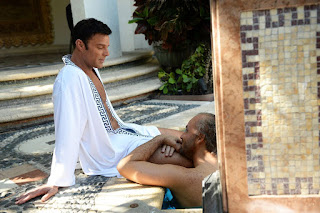 While one show is very much set in a fantastical world with super-powers and the other is a mostly-realistic retelling of actual events, they both deal with some very real issues. "Black Lightining," touches upon racial profiling, inequality, police brutality, poverty, and a whole bunch of social issues before any superpowers are even used, and the world of 1997 in, "American Crime Story," can feel strangely ancient and uncomfortably recent at the same time with its shockingly casual homophobia. Both new shows already have my attention due to how topical they are and because they're also really, really good. I'm excited to see the second episode of, "Black Lightning," later tonight and next episode of, "American Crime Story," tomorrow!
Posted by David Charles Bitterbaum at 9:58 AM