Flashback Friday: Two Creators with Four Comics I Keep Coming Back To

Books I Keep Re-Reading
Believe it or not, I've read a lot of comics over these years (shocking, I know). With all the comic-books I have read there are certain ones I find myself always wanting to go back and re-read even if my pile of new stuff which I need to catch-up on continues to grow. Therefore I wanted to share some of the comics I find I keep going back to every once in awhile to read and enjoy because I loved them so much. Interestingly enough, there are two creators who each did two comic series (so four total) that I find really stick out in mind. While there are a number of comics I love to revisit every now and then it is notable that these two gents have more than one book that really stay in my mind. Therefore, I wanted to talk about these two guys--Grant Morrison and Charlie Huston--and their two books. 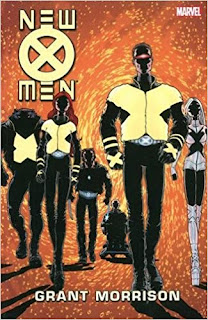 Grant Morrison's New X-Men
Morrison arguably provided the X-Men story for his run on the book. I think it is the best X-Men run ever, which lovers of Chris Claremont's stuff consider offensive, but I stand by my statement. Morrison came on the book and immediately did huge things like having the mutant island of Genosha be destroyed, introduced a drug called, "Kick," that was actual a sentient virus, took Magneto to his logical extreme endpoints, killed Jean Grey (who stayed dead until recently), gave us the new character Fantomex, made mutants more of a large minority population as opposed to  a small number of people in the world, and otherwise was amazing.

Morrison's run was so incredible Marvel had to basically undo most of it as soon as it ended through things like, "House of M," reducing the mutant population, trying to re-write Magneto's genocidal rampage in the book as being done by a psychic force known as, "Xorn," even though the whole point of, "Xorn," was that it was a fake personality Magneto posed as to infiltrate the X-Men. You know, dumb stuff like that because Morrison's run was too wild to let most of his changes stand. I still crack open the big omnibus collecting his entire run that I have to enmesh myself in Morrison's amazing run. 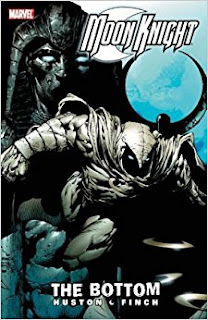 Charlie Huston's Moon Knight
I wasn't that familiar with Moon Knight some years ago. Then I picked up a hardcover at Borders (I told you this was awhile ago) that collected the first arc of Charlie Huston's run on, "Moon Knight." The six issues containing his writing and David Finch's artwork introduced me to a hero who was fascinatingly unhinged. A man who might have a serious psychiatric issue or legitimately have gained powers from an Egyptian God. Someone who either had multiple personality disorder, was simply pretending to be other people to fight crime, or maybe actually, "Became," the other men he would sometimes act like.

It was a revelation and resulted in me seeking out all the old, "Moon Knight," comics collected in the Marvel Essential's books, only to find that they had aged pretty well (prevalent sexism and racism of the era aside) and Huston had expertly drawn from these old stories for his amazing run on Moon Knight that sadly only went 13 issues before he handed the reigns to Mike Benson--who did a solid job, but it wasn't the same. Huston's Moon Knight run was stellar and I would say as good as the stuff by Doug Moench (who created the character), resulting in Huston's run being my favorite modern take on Moon Knight. 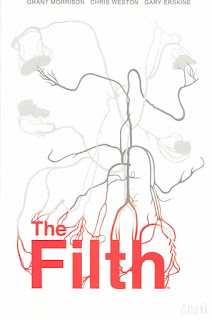 Grant Morrison's The Filth
Arguably my favorite comic of all time, this 13-issue mini-seires by Morrison with art by Chris Weston and colors by Gary Erskine is a masterpiece of surreal mind-fuckery. It's sort-of about a secret society that keeps the world safe--"Status Quorum,"--but it also involves a talking Russian chimp who killed Kennedy, injectable personalities, comic-books powered by living ink, a hyper-fertile porn star with amnesia, a miniature planet Earth made-up of little robots, the world's largest cruise ship that descends into an anarchic chaos, and so many other ideas that it makes my head spin to this day trying to wrap my mind around everything in this comic.

I always make sure I own two copies of, "The Filth," so that I have a copy to read and one to give to a friend who I think will appreciate its bizarre wonder. It isn't an easy book to get into at first with all the strange things going on and it can be confusing as Hell, but by the time you finish it...you're still a little overwhelmed. After you read it for the second or third time however you really begin to appreciate the book. 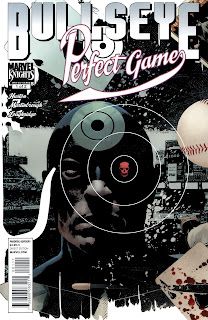 Charlie Huston's Bullesye: Perfect Game
I am probably one of a handful of people who even remember this book existing. It was a Marvel Knights two-issue mini-series that doesn't really even take place in continuity and focuses on a character I mostly dislike--Bullseye--playing a sport I honestly don't care much about--Baseball. However, Huston is such an amazing writer he creates probably the only comic with Bullseye that I've ever read where I maybe, just maybe, get some of the character's motivation. The general idea is that Bullseye knows he an amazing assassin and he's grown bored from the lack of challenge he faces. Then a lowball offer comes in for him to kill a star baseball player who didn't throw a game and cost some bad people a lot of money. Bullseye takes the gig and then...disappears for a year.

You see, Bullseye assumes a new identity and becomes a pitcher for a baseball team. He does all this because he wants to kill this target in the middle of a baseball game with a well-thrown ball so that the stadium full of people all see it and gasp. Bullseye is such an empty narcissist he's willing to take a poorly-paying assassination, work his way up through the minor-leagues, and wait until he finally faces this other player at bat just so he will get some twisted form of recognition from a large crowd. The story is narrated by an old baseball-memorabilia collector to an unseen listener and it gives the whole story an air of, "Is this true or some old man's ramblings?" It is weird, wild, and over just two issues results in a comic that I adore despite it being about a character I loathe (Bullseye is almost always just boringly evil) in a sport I consider slow and boring (which in the Saint Louis region makes people clutch their pearls and gasp in shock when you say you don't care about the Cardinals). Just an amazing weird comic you can find for dirt cheap on eBay as nobody else cares about it besides possibly me.

Always Worth a Revisit
There we go, four books by two creators that I keep coming back to. This was fun and maybe in the future I should talk about other comics by more folk I always enjoy rereading.
Posted by David Charles Bitterbaum at 5:09 PM