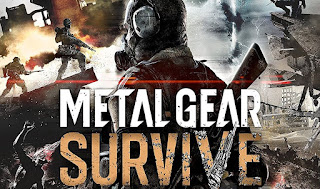 I have made it clear I have an immense love for the video-game series, "Metal Gear Solid." Created by Hideo Kojima it was a genius melding of game-play, cinema, philosophy, and while at times messy or chaotic, still was amazing. Then Kojima left/was fired from the company he worked for over many years, Konami, and is now working on other new and weird stuff that I'm excited for. That said, Konami lost the man behind all the best parts of, Metal Gear Solid," so what are they going to do? If your answer was, "Make a game set in an alternate reality where you play soldiers who fight glowing zombies," then you're right and smoking whatever the folk at Konami are puffing on.

Besides the fact that it uses the graphical program and assets from, "Metal Gear Solid V," it really sounds like, "Metal Gear: Survive," has next-to-nothing to do with the Metal Gear games and they just are using the name in the hopes that will help with sales. It's a soulless and vapid cash-in, in other words. Folk who have played the beta admit it is fun, but it still ain't Metal Gear. Plus, it's going to have micro-transactions and require players always be connected to the internet, so that isn't garnering much goodwill either. 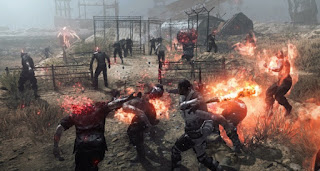 Look, if Konami wants to use the fancy technology Hideo Kojima developed for his games that is fully within their power as long as whatever contracts were signed previously allow such a thing to be done. That said, just because you're using the tech behind, "Metal Gear Solid V," and some of the imagery, that doesn't make your game, "Metal Gear Solid." The only thing that would truly make it, "Metal Gear Solid," is Kojima, and you apparently treated him horribly by all reports and he's gone.

"Metal Gear: Survive," may turn out to be good fun, even if it is just a big jumble of corporate concepts--"Zombies! Base-Building! Resource Gathering!" That said, it won't really be a Metal Gear game, and that is just kinda sad.
Posted by David Charles Bitterbaum at 11:48 PM