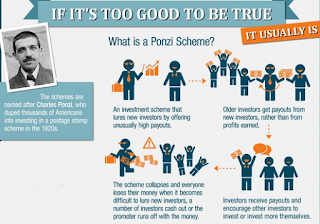 If you're on Facebook you've probably seen a handful of friends posting about how they, "Invested," $100 and after recruiting other friends to do so as well made $800. Whether its being called a, "Blessing Loom," "Gifting Cricle," "Money Pool," or something else this is an old scam with a new sheen that will eventually leave a lot of people out their money. These will declare they aren't pyramid schemes despite looking exactly like a pyramid and they actually kind of aren't--to be a pyramid scheme you are supposed to theoretically be investing in a product whilst recruiting people, be it leggings (LuLaRoe), over-priced sex toys (Pure Romance), or some other multi-level marketing scam. These are just promises of making money for doing nothing besides getting other people to make money--e.g. a Ponzi scheme. 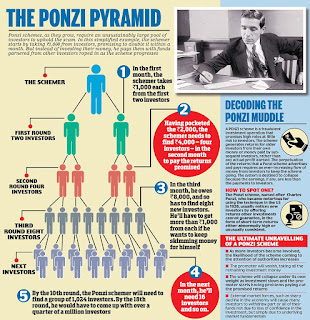 With a Ponzi scheme you recruit people to put money into a pool, who then recruit other people to put in money, and once enough people have joined you get paid. The problem is nothing is ever actually invested in and the only source of income is new people joining. You are basically, "Borrowing from Peter to pay Paul," and the issue is eventually if people quit joining you run out of, "Peters," and just have a bunch of, "Pauls," wondering where their money went. It's a Ponzi Pyramid and it always collapses at some point.

If you have friends trying to talk to you about taking part in anything that essentially promises, "Something for nothing," outside of a supposedly, "Small investment," and recruiting other friends, then run, run as fast as you can far, far away--and make sure you friends know what they are doing is dangerous, illegal, and could leave them broke. I'm trying to warn my friends and advise you do too.
Posted by David Charles Bitterbaum at 10:53 AM