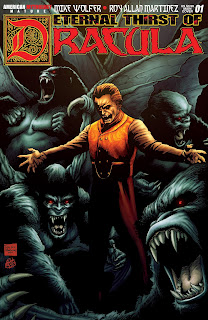 Update: The creators of the comic reached-out to me and expressed thanks for my review, but also asked what I thought about the color-work as I didn't mention it and they are curious of my thoughts. I would say the colors are great, with the violent scenes full of blood really, "Popping," and the more quiet moments having a less bright appearance as if to let us readers know things are mellow, but soon won't be! So yeah, the colors by Enrica Eren Angiolini are gorgeous as well.

When you are telling stories one of the most important things you can have going for you is a great concept. Even the best-written story may fail to impress if you're simply telling a yarn about a how a guy went to the corner store and bought some milk. Friend of the blog Mike Wolfer is of course a man whose work I've greatly enjoyed following because he almost always provides a great story with a cool concept, be it his stellar, "Widow," work, his creations he did at Avatar Press, or his latest comic I just read the first issue of, "The Eternal Thirst of Dracula."

In a written foreward to this issue Wolfer hints that the idea of the comic is that perhaps Bram Stroker's famous book, "Dracula," was in fact a true story, but it lied at the end when it claimed Dracula died. The comic itself then covers how perhaps Dracula survived and moved to a far away tropical island where few would suspect a resident of cold and mountainous Europe would go. This takes us to the main story about a film crew known for shooting B-movies that always in need of funding for their projects. A mysterious recluse with his own private island is interested in providing money for a new movie...and you see where this is going!
I'll be honest and say a lot of this first issue is a whole bunch of set-up, but thankfully it is fascinating set-up. It isn't until toward the last few pages we see just how dangerous and powerful Dracula is plus get a surprising reveal about another character, but thanks to all the storytelling pieces being put in place in this issue I feel the twist at the end of this issue hits all the harder.  I've got more than enough trust in Wolfer's writing abilities to know he's going to continue to give us a great story, but the greedy part of me wishes this were a double-sized premiere issue so that we could get some more follow-up to the great climax at the end. Then again I can't be too upset however, because this comic has absolutely gorgeous artwork.

So far I've of course complimented Mike Wolfer a bunch because I love his work, but artist Roy Allan Martinez absolutely kills it on this book. His drawing style makes the jungle feel so lush and dense I could feel the heat suffocating me just by looking at the page. His monstrous characters we see revealed at the end of this issue are terrifying and imposing, and of course the lithe female vampires that populate the island are as sexy in shape as they are hideous in bloodlust. Mike Wolfer is a great writer, but if he had shit the bed and turned in a rare terrible script this comic would still be a must-read thanks to its artwork--thankfully Wolfer kept the metaphorical bed clean so that we get a comic that has both a killer concept and amazing art, which always impresses. Plus, the fantastic lettering by (also friend of the blog) Natalie Jane is just some amazing icing on the cake!
"The Eternal Thirst of Dracula," has to do a lot of setting-up in regards to its plot, but Wolfer's great writing and Roy Allan Martinez's jaw-dropping artwork still resulted in a comic I loved, so I eagerly give this 5 out of 5 stars. You can snatch yourself up a copy of this comic on eBay, or support the publisher of the book, American Mythology, and buy this issue from their own store.
Posted by David Charles Bitterbaum at 11:08 AM