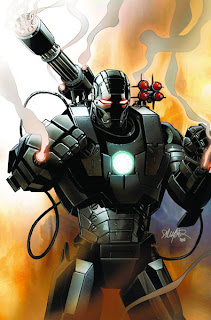 Iron Man 2.0 #1
James Rhodes gets another solo comic, this time as a military operative. Can the man who writes T.H.U.N.D.E.R. Agents bring us more dynamite? Well, this  certainly is a good start.

Opening as if it were another Iron Man comic with Tony Stark fighting some D-list villain, things don't seem too special. However, when Rhodes shows up and kicks the baddies tuckus you can tell this is going to be a War-Machine focused comic. Spencer writes some nice dialogue between Rhodes and Stark that tells you right away they are good friends who talk about anything. 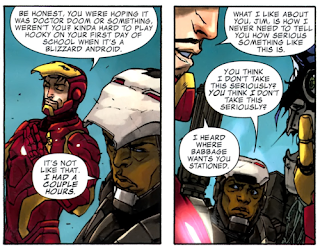 The basic plot is with Tony Stark no longer working with the military (as happened in his main series, "Invincible Iron Man") they still are owed an Iron Man, and who better to use than former military member James Rhodes? The rest of the comic is spent with other character's discussing Rhodes in a clever way to do exposition in the comic without it being obvious, and a mystery being presented. I'll admit, the mystery had me stumped too, until one panel in the comic gave it away. I honestly wasn't expecting for us readers to learn the twist so early before the characters themselves, but I found it creative. It makes me wonder when Rhodes and everyone else will get to the bottom of the mystery too. 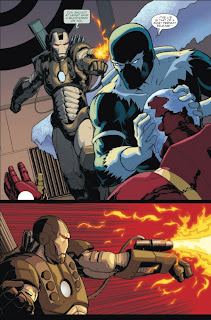 Overall I am interested in what it coming next in the story, enjoying the art, and otherwise found this comic solid and worthwhile. One problem is that the comic is $3.99 and Marvel tries to make you feel like you weren't fleeced by having one of their character-history pieces in the back of the book. As always, while it was nice I could have done without it and just paid $2.99.  Still good fun though.
3.5 out of 5 stars.
Posted by David Charles Bitterbaum at 5:00 PM