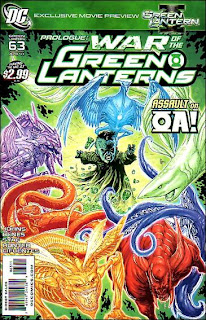 Green Lantern #63
The Prelude to the "War of the Green Lanterns" crossover, with the cover claiming an assault on Oa that doesn't actually occur this issue. Despite not delivering on its promise, this issue is still somewhat enjoyable if feeling incredibly light.


DC kept many of their comics at $2.99 by lowering the page-count, and I haven't really noticed until now. This issue just felt kind of short. Maybe it was the extended flashbacks or time spent with the growing cast talking amongst themselves, but the story didn't seem to really get going until towards the end right before stopping. There is an interesting adjustment to continuity Geoff Johns makes with the infamous Manhunter robots and the flashbacks help flesh out just who this Krona is for those of us who aren't well-versed in DC continuity 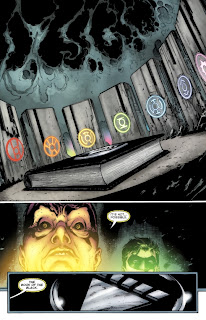 I just wish this issue had more to it, with the fact that a good chunk of these pages being previewed in other comics possibly making me feel like I didn't quite get a full meal and instead a snack of a comic. It was still fun and Ed Benes didn't do his usual excessive T&A hackwork while on this issue as the penciler, so I guess this is above-average, but not too impressive. I'm interested in the cross-over now though, so I guess mission accomplished there.
3 out of 5 stars.
Posted by David Charles Bitterbaum at 9:00 PM